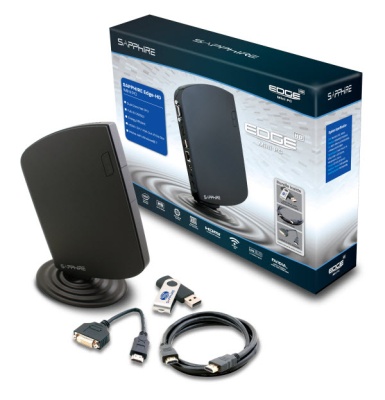 Graphics card maker Sapphire has released its first desktop computer, the Sapphire Mini PC Edge-HD. As you’d expect from a company with Sapphire’s pedigree, the Edge-HD has a focus on high performance graphics. But honestly, that doesn’t set it apart from most other nettops on the market today, since it has the increasingly common NVIDIA ION 2 graphics card bundled with a low power 1.66 GHz Intel Atom D510 dual core processor.

The computer comes with FreeDOS preloaded but supports Windows XP through Windows 7 (or Linux or just about any other OS you’d probably care to throw on it).

The computer is expected to run about $300, and that price seems to include 1GB USB flash drive with drivers as well as an HDMI cable, HDMI to DVI adapter and a stand.