As promised a few months ago, the first microSD cards capable of storing up to 1TB of data are here. If you’ve got $450 burning a hole in your wallet, now you can spend it on a 1TB SanDisk Extreme microSDXC card. 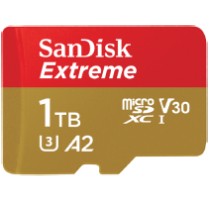 For that price you get not only one of the highest capacity cards in this class, but also one of the fastest, with support for data read speeds up to 160 MB/s and write speeds up to 90 MB/s, which means you can use it for capturing and/or viewing 4K video, among other things.

That said, you could probably save a lot of money by purchasing a few smaller (but still big) cards.

Case in point: a 400GB version of the SanDisk Extreme card sells for $90 at Amazon. In other words, you could buy five of them and get 2TB of storeage for the same price as a single 1TB card. You just may have to swap cards a little more often.

If you’re willing to settle for a somewhat slower card, the Sandisk Ultra 400GB if currently on sale for $57 (which means you can buy 8 of them, get 3.2TB of storage, and still have some money left over).

Of course, prices for 1TB cards will likely fall in the future. But as is often the case, being an early adopter is expensive.