Need a little extra storage space for your smartphone or tablet? SanDisk has just launched a microSDXC card that can hold up to 200GB of data. 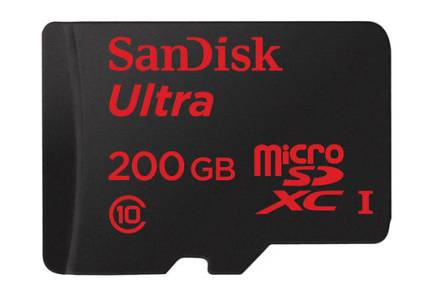 The new SanDisk Ultra UHS-I Premium Edition card offers 56 percent more storage than the 128GB cards that seemed so big up until now. The cards support data transfer speeds up to 90 megabytes per second.

But while this may be a case of big things coming in small packages, they also come with big prices. The first 200GB microSDXC card will sell for $400 when it goes on sale in the second quarter of 2015.

It’s never cheap being an early adopter… but prices will probably fall once there’s a little more competition. Most microSD cards on the market today sell for closer to $1 or less per gigabyte.

Fun fact: SanDisk launched its 200GB microSDXC card on the same day that HTC introduced the HTC One (M9) and Samsung unveiled its Galaxy S6 smartphones. HTC’s new phones have microSD card slots, but Samsung’s new models do not.