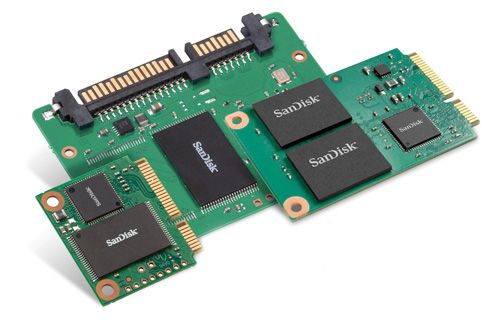 SanDisk is launching several new flash storage modules for notebooks and mobile devices. First up is the company’s new U100 SSD with read speeds up to 450MB/sec and write speeds up to 340MB/sec.

The U100 is a SATA III card designed for thin notebooks and mobile devices. It will come in a number of different form factors including 2.5 inch drives, mSATA, mSATA mini, and half-slim SATA SSD modules. U100 modules will be available in capacities ranging from 8GB to 256GB.

Next up we have the i100 iSSD which is a SATA III integrated module which can be used in tablets, notebooks or other mobile devices. The i100 is available in sizes ranging from 8GB to 128GB and offers read speeds as high as 450MB/sec but write speeds top out at 160MB/sec. The 128GB module measures 16mm x 20mm x 1.85mm while lower capacity versions are 16mm x 20mm x 1.4mm.

Finally we have the iNAND line of embedded storage products for tablets and mobile devices. These chips are designed for tablets, smartphones, and other mobile devices. The top of the line iNAND Extreme EFD will have read speeds up to 80MB/sec and write speeds as high as 50MB/sec and come in 16GB and 64GB capacities. That’s a lot slower than the speeds you’ll see from the other modules listed above, but the iNAND Extreme EFD is more than fast enough to handle HD and 3D video recording and other tasks that require speedy storage.