As expected, Samsung has beat Apple to market with a wireless charger that you can use to charge a two devices simultaneously.

Both versions sell for $120, and both are capable of charging a smartphone and smartwatch at the same time, or two smartphones, as long as they use the Qi wireless charging standard. 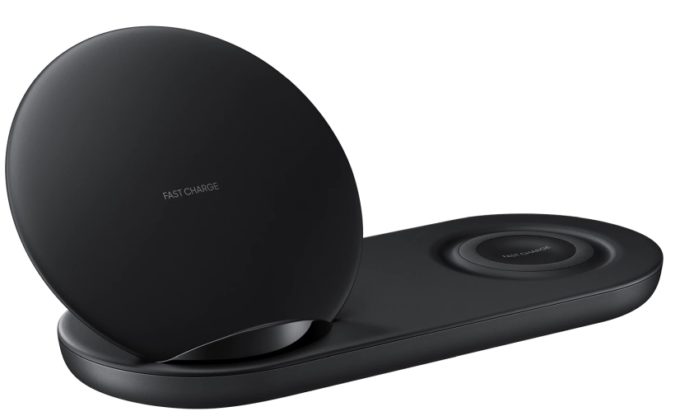 Samsung says the device supports 7.5 watt fast charging on supported devices including the Galaxy Note 5 and later and the Galaxy S6 Edge+ and later.

The Samsung Wireless Charger Duo has a built-in stand to prop up one of the devices you’re charging, and a flat pad for a second device. There’s an integrated fan to keep the charger from getting too hot.

And if you don’t have a Samsung phone or watch, you can use the charger with third-party hardware. It supports any Qi-certified devices, which includes most Android phones that support wireless charging as well as Apple’s iPhone X or iPhone 8 series phones.

That said, the $120 price tag does seem a little steep at a time when you can often find single-device wireless charging pads and stands for under $30. It’s probably cheaper to just buy two wireless chargers if you want to keep two different devices charged… but that is a slightly less elegant solution since it means two gadgets to plug into the wall instead of one: “wireless” only applies to the way you charge your phone, watch, or other devices. The charger itself still needs to be plugged into an electric outlet.