Like their predecessors, the new models come with a choice of 13 inch or 15 inch touchscreen displays, pen support, and a 360-degree hinge that allows you to fold the screen back for use in tablet mode.

But Samsung says the new models featured reduced latency while using the pen (plus three interchangeable pen tips to choose from), features a refined design, and adds support for Gigabit WiFi — suggesting that when the company says the new Samsung Notebook 9 Pen has an 8th generation Intel Core processor, the company means it has a Whiskey Lake-U chip.

The new laptops will be available in Korea starting December 14th, before rolling out to additional markets including the US, China, Hong Kong and Brazil early next year. 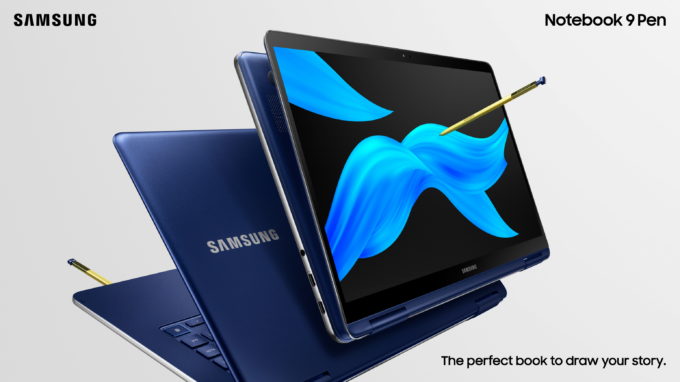 Both the 13 and 15 inch models have aluminum bodies, backlit keyboards, full HD displays, 54 Wh batteries, and support for up to 16GB of LPDDR3 RAM and up o 512GB of PCIe solid state storage.

The laptops each feature two Thunderbolt 3 ports, a USB Type-C port, a headset jack and a microSD card slot. There’s a fingerprint sensor and an IR camera for face recognition. And the Samsung S-Pen slides into a slot in the computer when you’re not using it. Like Samsung’s S Pens for phones and tablets, the stylus does not need to be charged.

The laptops support fast charging and come with USB-C chargers, which is nice. What’s a little less nice is that there are no USB Type-A ports, HDMI, or Ethernet ports, so you may need an adapter, dock, or dongle if you want to connect some peripherals (like a monitor).

There are a few differences between the Samsung Notebook 9 Pen models with 13 inch and 15 inch screens. Obviously the larger model is bigger and heavier, for one. But it also features NVIDIA GeForce MX150 graphics, while the 13 inch version has only Intel UHD integrated graphics.

The company hasn’t announced pricing details for the new laptops yet.