Samsung’s DeX dock lets you connect one of the company’s recent phones to an external display, mouse, and keyboard to use your phone like a desktop PC… assuming you’re comfortable with a desktop PC that runs Android.

But soon you may also be able to use your Android phone as a Linux PC. Samsung recently unveiled plans for “Linux on Galaxy,” promising that you’d be able to run a full-fledged Linux environment on a phone hooked up to a DeX dock.

Now the company has released a brief video that provides more details. One of those details? At least one of the Linux environments in question seems to be Ubuntu 16.04. 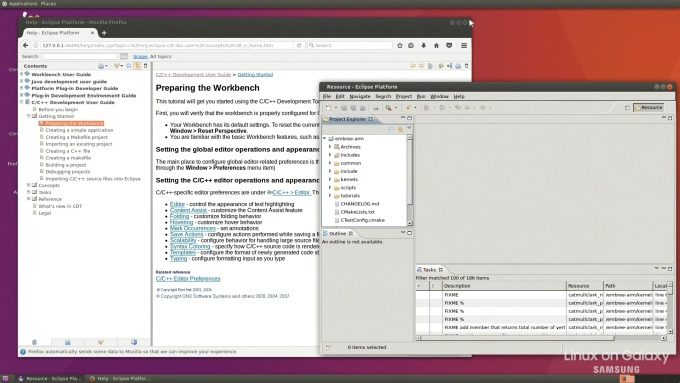 In the video, we see someone dock their phone, choose the “Linux on Galaxy” option from the desktop, and then choose Ubuntu 16.04 LTS. While that’s the only option shown, the fact that it does seem to be an option suggests you may be able to run different Linux environments as well.

While Samsung seems to be showing off the developer-friendly features of Linux on Galaxy right now, theoretically non-developers could use the Linux environment to run desktop apps rather than Android apps when a phone is docked. For instance, this could open the door to desktop versions of Chrome, Firefox, LibreOffice, GIMP, or other popular GNU/Linux applications… although it’s worth noting that Samsung hasn’t shown any of those programs working yet, so it’s not clear how easy it would be to install them or how well they would run.