Samsung may finally be getting ready to launch its first smartphone running the Linux-based Tizen operating system. Of course, we’ve heard that before — Samsung has repeatedly pushed back the launch of Tizen-based phones.

But if Samsung goes through with it this time, it looks like customers in India might be able to pick up a low-cost phone running Tizen as soon as January. 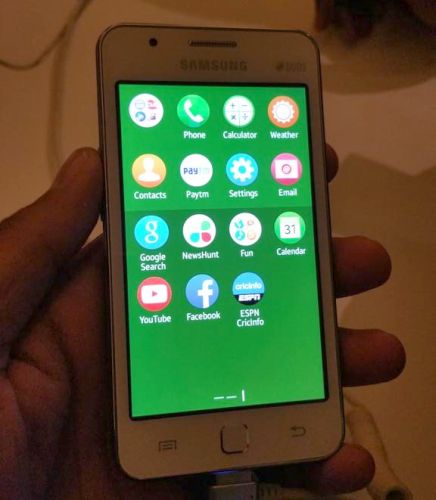 Indian phone seller Manish Khatri has posted a series of photos and other details that seem to have been taken from a Samsung event. They outline a new phone called the Samsung Z1, which seems to be more of an entry-level device than the Samsung Z that the company unveiled this summer before putting on hold indefinitely.

The phone will have to compete with other low-cost phones in India including models running Mozilla’s Firefox OS as well as inexpensive Android phones. Several phone makers offer Android One smartphones which receive software support from Google, and Micromax recently launched the Yu brand of smartphones powered by Cyanogen OS, a custom version of Google Android aimed at power users.

It could be tough for a new platform to compete with established players, but judging by the Samsung Z1’s hardware, it looks like Samsung is hoping its fist Tizen phone will appeal to bargain hunters. That could help the company get a foot in the door, gain market share, and develop a more robust ecosystem of third-party apps. For now it looks like Tizen phones will ship with a Samsung app store and Nokia’s Here Maps with support for offline maps, among other things.