Samsung is rolling out Android 6.0 to the Galaxy S6 and Galaxy S6 Edge smartphones, and the company plans to bring updates to other Galaxy phones soon.

While the new software brings all the usual Marshmallow goodies, there’s also one major change for Galaxy S6 Edge users: Samsung is updating the “Edge Screen” feature to let you see more content on the edge of your display.

The company is also kind of redefining which part of your phone is the edge. 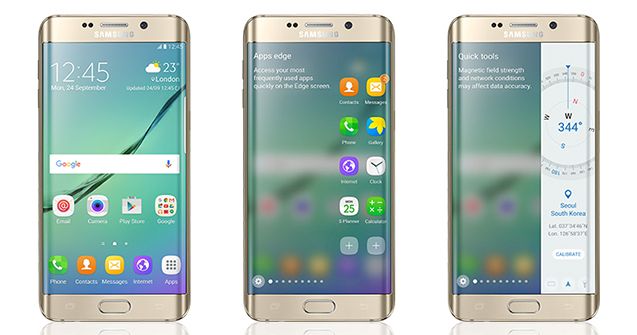 The Galaxy Edge line of phones get their name from a display that sort of wraps around the edge of the phone a bit, allowing you to see some content even when you’re viewing the phone from the side. This lets you view notifications and other information at a glance when the phone is lying flat on a tablet, for example.

Up until now the Edge Screen feature was 260 pixels wide, meaning it took up less than a fifth of the screen. Now Samsung is expanding Edge Screen so that it can use up to 550 pixels… which is more than a third of the real estate on a phone with a 2560 x 1440 pixel display.

It also means that you won’t see much of the Edge content on the actual edge of the phone, since a fair amount of it will just be on the front of your phone.

That said, Samsung is clearly trying to make its Edge feature more useful, and the company has announced that there are new third-party apps from Yahoo!, Naver, and others.

The People Edge feature has also been updated to show names as well as pictures of your contacts, the Apps Edge panel now lets you see 10 apps at time instead of 5, and there are support for more panels including Tasks and Quick Tools (which include a compass, ruler, and flashslight controller).