Samsung is bringing six new Galaxy A series smartphones to the United States starting this week when the new Galaxy A01 and Galaxy A51 will be available from select stores. 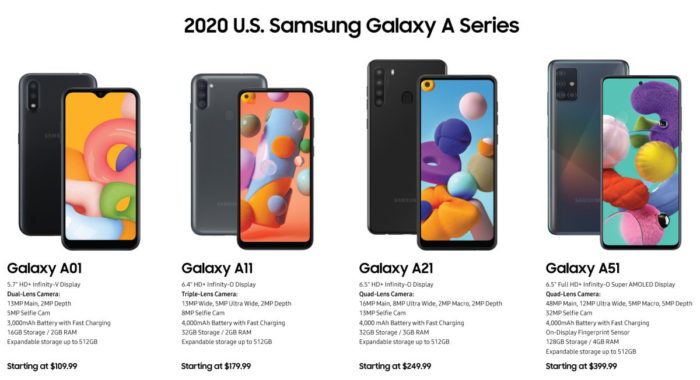 The Samsung Galaxy A01 is an entry-level phone with a starting price of $110, but it has a bunch of features that you would have expected from flagships a few years ago including a high screen-to-body ratio and dual rear cameras.

Samsung says the phone has a 5.7 inch HD+ display with an”Infinity-V” style notch for a 5MP front camera, 13MP primary + 2MP depth cameras on the back, and a 3,000 mAh battery. The Galaxy A01 features 2GB of RAM and 16GB of storage plus a microSD card reader for up to 512GB of removable storage.

Samsung has also just introduced two new 5G-ready smartphones which are coming this summer — the Galaxy A51 5G, which will start at $500 and feature a faster processor, up to 8GB of RAM, and a 4,500 mAh battery and 15W fast charging, and an integrated 5G modem, as well as the Samsung Galaxy A71 5G, which is a $600 phone with a FHD+ Super AMOLED/Infinity-O display, quad cameras including a 64MP primary shooter, a 4,500 mAh battery, and 25 watt fast charging.

Both phones feature in-display fingerprint sensors and microSD card readers for up to 1TB of removable storage.