Samsung offers Android tablets with screen sizes ranging from 7 to 10 inches, and plenty of phones and so-called “phablets” if you want something smaller. Eventually there may be a larger option as well.

There’s been a rumor going around for months that the company is working on a 12.2 inch Android tablet, and now the folks at VR-Zone dug up a few more bits of evidence. There’s still no word on how much it’ll cost or when it’ll be available. 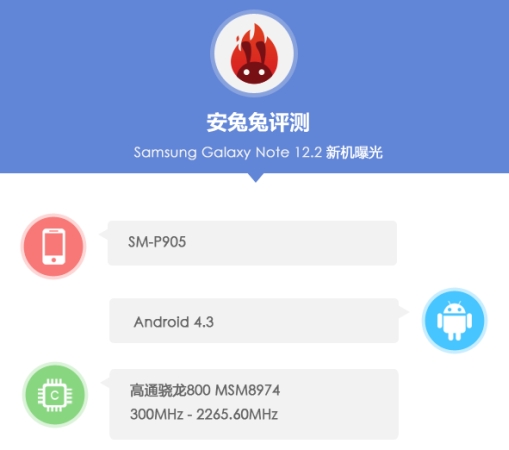 According to a Bluetooth SIG listing, it looks like the SM-P905V tablet could be heading to Verizon’s wireless network.

And according to a listing at benchmarking site Antutu, we can expect the tablet to feature a 12.2 inch, 2560 x 1600 pixel display, a Qualcomm Snapdragon 800 quad-core processor, Adreno 330 graphics, 3GB of RAM, and 32GB of storage. It’s currently running Android 4.3 Jelly Bean software.

That’s make the tablet one of the most powerful Android tablets around, and not just one of the biggest. It’d basically have the specs of a Samsung Galaxy Note 10.1 2014 Edition, but a larger display and body.