Samsung plans to introduce a new processor for phones, tablets and other mobile devices in February. Some folks are calling the new chip an 8-core processor, and that’s actually kind of true. But really, it will offer the performance of a high-end quad-core ARM-based processor and the power savings of a low-power quad-core ARM chip.

That’s because it will have 4 ARM Cortex-A15 high performance cores as well as 4 Cortex-A7 cores, arranged in a big.LITTLE configuration. 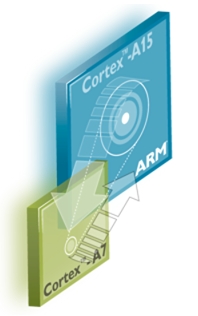 Big.LITTLE is ARM’s chip design that lets you pair a low power companion core with a high performance chip. When a phone or tablet is idle or performing basic tasks, it can shut down the high power core to save power and rely on the companion core.

According to EE Times, Samsung will unveil its new quad-core variant in at a conference in February.

While Samsung is introducing the new processor in February, we probably won’t see it in actual products until later in the year. Samsung introduced the Exynos 5250 almost a full year before that chip actually started shipping.