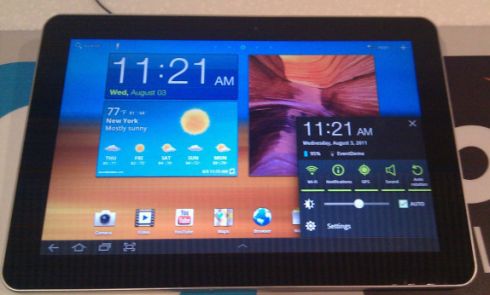 Samsung will begin rolling out a major software update for the Galaxy Tab 10.1 tablet on Friday, August 5th. The new software will bring the Samsung TouchWiz user interface to the 10 inch Android tablet, as well as a series of new apps for managing your social networks, purchasing music and movies, and finding a lost or stolen device.

The company introduced the software at an event in New York today, where Samsung also unveiled some new tablet accessories. I also received the update on the demo unit I’ve been borrowing so that it now runs TouchWiz. I received a manual update, which wiped all the data from my tablet, but the over-the-air update coming later this week will bring the new software without removing any of your files, installed programs, settings, or other data.

Historically I haven’t been a huge fan of third party user interfaces designed to run on top of Android, since they tend to make user navigation more complicated rather than simpler. But the TouchWiz update actually seems pretty nice at first glance. 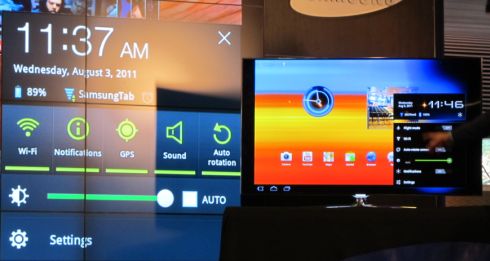 For instance, Samsung’s version of the Quick Panel is much more useful than Google’s — allowing you to adjust screen brightness, wireless connections, and other settings with just two clicks. With the Google panel, you have to open the Quick Panel, tap the settings button, and then navigate through a long list of menu items to perform the same actions.

Samsung has also made it extraordinarily easy to take a screenshot on a Galaxy Tab 10.1 tablet by placing a screenshot button right next to the Recent Apps button in the bottom panel. This is a feature that’s probably a lot more useful for journalists and bloggers than the general public, but it’s a nice attempt to make something that’s normally very difficult to do on Android devices much easier.

The biggest new features are the Live Panels and the Mini App Tray. 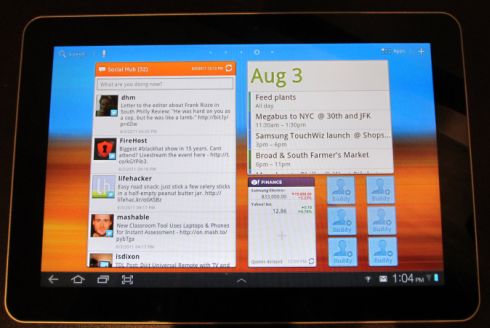 Live Panels are a series of new homescreen widgets that give you up-to-date information at a glance. For instance there’s a Social Hub widget that integrates with the Samsung Social Hub software to view the latest updates from your social networking and email accounts. The app allows you to view updates by network or view a stream with all the latest information. It’s pretty nice, but it doesn’t allow you to use multiple Twitter accounts.

The Mini App Tray allows you to tap an icon on the bottom of the screen to bring up one of six different apps that don’t take up the full screen. This allows you to pull up a calculator, for instance, if you’re surfing the web, and minimize it when you’re done.

Samsung says the Mini Apps are “frequently used” applications, but honestly I don’t know how often I would use the world clock or calculator. On the other hand, the task manager, pen memo app, calendar, and music player controls seem like they could be handy. 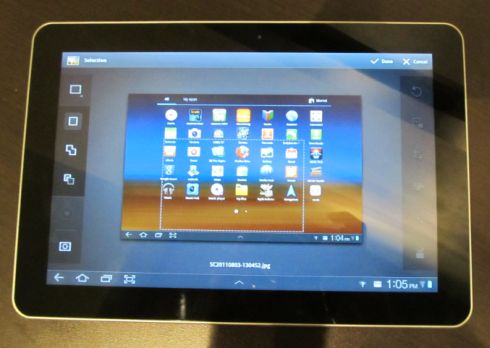 Another nifty app that comes with the software update is a photo editor — so when you snap a photo with the tablet’s camera or grab a screenshot you can edit it directly on the tablet. The controls should be intuitive if you’ve used Photoshop or other image editors — but I’m not really a Photoshop guy and I wouldn’t have minded some text descriptions under those pretty icons.

While you can use the Galaxy Tab 10.1 without signing up for a Samsung account, if you do opt into Samsung’s service you get a few extra features including the aforementioned “Find my mobile” feature and the ability to purchase music and movies — and download movies on up to 5 different Samsung devices including phones and tablets after purchasing once.