Samsung is holding an event later this month where the company is expected to launch several new Galaxy-branded laptops and tablets. And it looks like new accessories are on the way as well.

After publishing details about the new Samsung Keyboard Trio 500 on the Samsung Levant website earlier this month, Samsung has now confirmed that the keyboard features a DeX key that lets you quickly activate Samsung’s Android-as-a-desktop-OS software with a single keypress. There are also three app shortcut keys that you can use to launch up to three different apps of your choice.

Now Samsung has officially announced the new multi-device wireless keyboard with a few special features for folks with Samsung Galaxy smartphones and tablets. Pricing hasn’t been revealed yet, but Samsung says the new keyboard will be available in May, 2021. 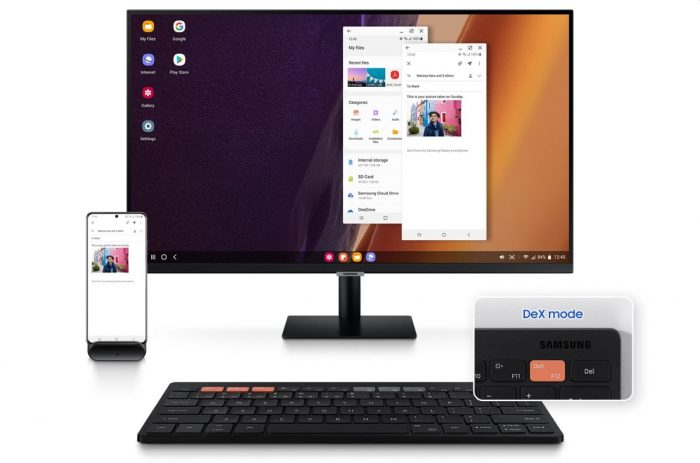 The compact keyboard measures about 11″ x 5″ x 0.6″ and weighs less than 15 ounces and Samsung says its keys are “almost the same size as a regular keyboard’s” while offering an overall small footprint that should make the keyboard portable enough to take with you or useful enough to place on your desk. It’s powered by a pair of AAA batteries, and while I know some folks would prefer a built-in rechargeable battery, this setup does have the advantage of allowing you to swap batteries on the go and/or use your own rechargeables which can be replaced years from now if they begin to degrade over time.

Samsung’s new keyboard can be paired with up to three different devices, allowing you to, for example, switch between phone, tablet, and PC with a button click.

It will be available in black or white color options, and the keyboard has all the usual alphanumeric and symbol keys plus a handful of special function keys in the Fn row, including:

That last key lets you active Samsung’s Android-as-desktop user interface that gives the mobile operating system a taskbar, desktop, and support for viewing running applications in resizeable windows that can be moved across the screen. Basically it lets you use Android in a similar fashion to Windows, macOS, or most desktop Linux distributions.

Samsung notes that the keyboard supports DeX on tablets including Galaxy Tab S4, S5e, S6, and S7 series tablets as well as the Galaxy Tab Active Pro. It’s unclear if the upcoming Galaxy Tab S7 Lite will support DeX mode or not.

Update: The Samsung Keyboard Trio 500 will be available in Germany starting in June for about $55.

9 replies on “Samsung Smart Keyboard Trio 500 with a DeX button is made for tablets, phones, and PCs”