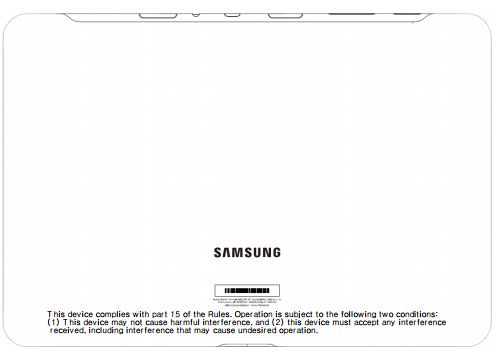 The Galaxy Note is pretty easy to identify. There’s a drawing of the back of the tablet which matches the pictures of the 10 inch tablet Samsung has officially released.

Samsung plans to launch this 10.1 inch tablet with a quad-core processor and digital pen for writing or drawing later this month. It will be available in WiFi-only and 4G capable models. The version listed at the FCC should be able to work on AT&T’s wireless network in the US.

The second tablet that passed through the FCC this week is a bit more of a mystery. The label drawing shows corners that are more rounded than those on the Note, and no buttons. That doesn’t mean there aren’t any buttons visible from the back of the tablet. They just don’t show up in this simple line drawing.

Judging by the placement and size of the camera, this also looks like a 10 inch tablet. And according to the FCC listing it will support 802.11n WiFi, Bluetooth, and NFC.

One reply on “Samsung slides LTE, NFC-equipped tablets through the FCC”