Folding smartphones are on the way, and Samsung is leading the charge. At the company’s developer conference in San Francisco today the Samsung offered a sneak peek at its very first such device: The Infinity Flex Display.

When folded, it looks like a normal smartphone. Unfolded, it’s a tablet with a 7.3 inch screen. 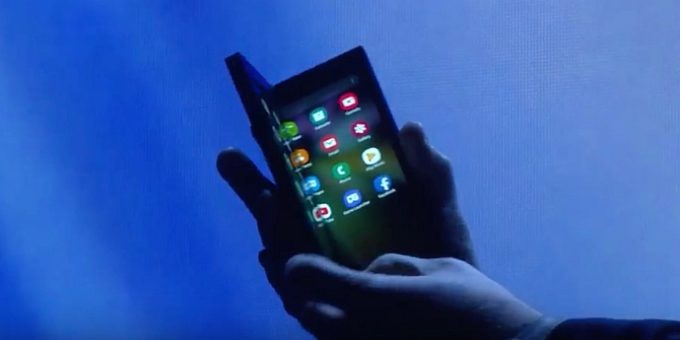 Samsung’s first folding phone is the result of years of research and numerous innovations. Samsung had to develop a protective polymer that’s both tough and bendable as well as a flexible adhesive to hold the display’s layers together.

When it’s closed, the device operates in smartphone mode and appears to be roughly the same size as the Galaxy Note 9 (albeit in a much clunkier chassis). Unfold it and it automatically switches to tablet mode.

Interestingly there appear to be two screens: an external display that you interact with when using the device as a pone, and a larger internal display for tablet functionality. When you fold the phone in half, the tablet-sized screen folds in on itself and the phone screen turns on.

Samsung didn’t offer many details about what tablet mode will let you do that phone mode does not, but the company did mention additional multitasking features. You’ll be able to run three apps side-by-side in tablet mode, for example.

It’s a phone… It’s a tablet… It’s a phone that unfolds into a tablet! #SDC18 pic.twitter.com/FgwpJPjqTn

No launch date was announced for the device and Samsung didn’t mention a name. Samsung VP Justin Dennison did say that the company would begin mass-producing it sometime in “the coming months.” It’s expected to arrive early in 2019.

MWC 2019 is slated for February 25 and 28, 2019, so it’s possible the retail version of this device could make an appearance in Barcelona.

Samsung has also been working closely with Google to ensure that Android will be ready to handle devices with flexible screens when they arrive. By the time hardware arrives in stores, you can expect updated Android apps to automatically adapt to the change in modes.

In a blog post, Google explains that Android will support an entire new category of “foldables,” including dual-screen devices and devices with a single flexible display like the Samsung Infinity Flex. In Google’s vision, users will be able to “seamlessly” transition from smartphone views to tablet views when a device is unfolded.

8 replies on “Samsung Shows Off Its First Folding Smartphone”