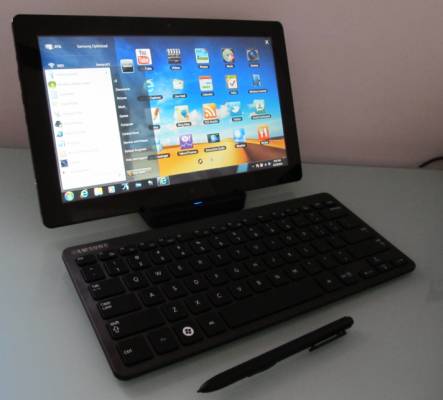 We’ve seen a lot of tablets hit the market over the last year or two. Most run Google Android, iOS, or other operating systems designed for mobile devices. The Samsung Series 7 Slate is something different. It’s a Windows 7 tablet that takes full advantage of the touch-based features in the operating system, and which has hardware powerful enough to provide a pretty good Windows experience.

Those extra features come at a price. Tehe Series 7 Slate sells for $1149 and up

Samsung loaned me a demo unit of to test, and while I’ve only spent a few days with the tablet so far I wanted to share a few initial thoughts. We’ll have a full review coming soon.

It’s not just the operating system that sets the Series 7 apart from the Android tablets I’ve reviewed recently. It’s what you can do with the tablet. Since it runs a full version of Windows 7 you can run full desktop apps including Microsoft Office, Photoshop, Internet Explorer, Firefox, and more. But Samsung also includes a finger-friendly app launcher and a handful of apps that run in full screen mode, much as they would on an Android, iOS, BlackBerry, or webOS tablet.

So at times, it’s actually a little tough to really tell the difference between the Series 7 and a much cheaper tablet. For instance, you can use the web browser to scroll through pages with your fingers or pinch-to-zoom. The browser feels a little faster than the one you’d get on a cheaper tablet, but the experience isn’t that different.

Where things do start to get different is when you exist the finger-friendly UI and start using a stylus to navigate the Windows 7 desktop experience. The tablet has a capacitive touchscreen display for finger input, but it also has an active digitizer that works with a digital pen.

This allows you to tap the screen with more precision, draw pictures with pressure-sensitive input, click or right-click, and generally use the Series 7 almost as easily as you could if you were using a computer with a keyboard and mouse.

Samsung also bundles a version of the Swype digital keyboard with the tablet. So if you don’t want to use the built-in Windows keyboard or handwriting recognition function you can pull up Swype and enter words by swiping your finger from letter to letter without lifting your finger from the screen.

Up until recently Swype was only available as an Android app, but I find it much easier to use than the default Windows keyboard. Unfortunately it has a way of taking over the input panel and popping up when you don’t need it, or when you’d rather use the Windows handwriting feature.

Samsung also loaned me the optional docking station and wireless keyboard which really does make the Series 7 into a sort of desktop computer. The 11.6 inch, 1366 x 768 pixel display is about the same size as the screen on my laptop, and I can imagine getting some serious work done with this setup. There’s also a full-sized USB port so I could plug in a mouse as well.

At nearly 2 pounds the Series 7 is a lot heavier than most Android or iOS tablets. The widescreen display is also wide enough that the device feels a bit odd when held in portrait mode. But at 0.5 inches thick, the Series 7 Slate is pretty svelte, even by modern tablet standards. It also feels very sturdy.

The unit I’m reviewing has a 64GB solid state disk, 4GB of memory, and a 1.6 GHz Intel Core i5-2467M processor. It runs Windows 7 Home Premium and has a Windows Experience Index f 4.6.

I’ve found that at times the back of the tablet can get a little warm to the touch and the fan can be a little noisy when it kicks in to try and cool the computer down.

But so far the Samsung Series 7 is the fastest, most responsive Windows 7 tablet I’ve spent any appreciable time with — although to be fair, I’ve mostly spent my time with low-end computers with Intel Atom processors.

Is the Samsung Series 7 Slate worth more than twice as much as those devices thanks to the faster processor, higher quality screen, active digitizer and other features? It’s hard to say.

It’s definitely easy to justify spending more money to get those features. But $1149 is a lot of money to spend on a computer when you can pick up an iPad for $499, an Amazon Kindle Fire for $200, or a netbook for under $300.

I have a hard time imagining the Series 7 Slate unseating any of those devices. But it feels like a solid niche product that’s going to appeal to customers that really need to be able to draw on a tablet or use a stylus for other reasons, as well as customers that need to run Windows software rather than mobile apps on their portable tablet-style devices.