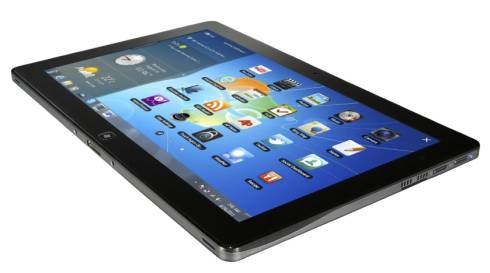 The Samsung Series 7 Slate is a tablet designed to run Windows 7. It features an 11.6 inch, 1366 x 768 pixel capacitive touchscreen display, an active digitizer for digital pen input, and an Intel Core i5-2467M processor.

While Samsung had originally planned to start selling the tablet on October 2nd, it isn’t shipping in the US yet. But you can pre-order the computer from Amazon for $1349

For that steep price you get a slate computer running Windows 7 Professional, a 128GB solid state disk, 4GB of DDR3 memory, 802.11b/g/n WiFI, and front and rear facing cameras. The tablet weighs 2.1 pounds and gets up to 7 hours of battery life.

Samsung is also expected to offer cheaper models with 64GB of storage and Windows 7 Home Premium for $1099 and up.

Those prices certainly aren’t cheap — especially when you compare the tablet to the Apple iPad or recent Android tablets. But the only Windows tablet with similar features (an Intel Core i5 processor, capacitive touch panel, and digital pen) is the Asus Eee Slate EP121 which launched earlier this year and currently sells for $960 and up.