That’s convenient, because both of these computers run Windows 8.

We got a first glimpse of a Samsung Series 5 Hybrid a few months ago, but this week Samsung is officially introducing the tablets, as well as pricing details. 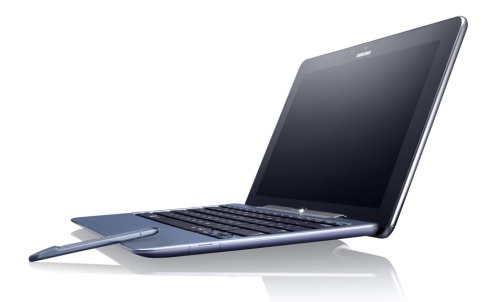 Both the Series 5 and Series 7 offer all the benefits of an ultraportable notebook and a tablet, including full sized ports and a long battery life.

The Series 5 Hybrid starts at $649 for just the tablet. Add $100 to the price for the keyboard base.

The Series 7 is the more robust of the two and will sell for $1199, base included. The higher price gets you a higher resolution display, a speedier processor, and other premium features which I’ll outline in a moment.

These Hybrids look very similar to the early model Samsung showed off but have key differences. The biggest is in the hinge/connector. Instead of holding the tablet bit to the base with just magnets, there’s now a physical lock involved.

The two pieces are still easy to pull apart thanks to a release button. You won’t struggle when snapping the tablet in place, either. 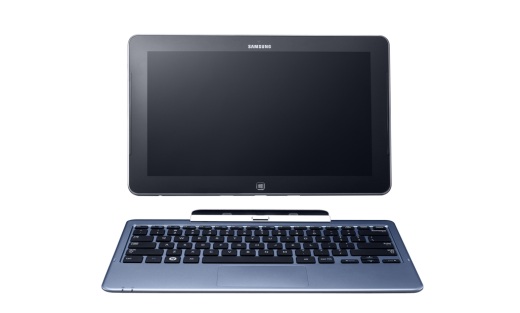 Another aspect Samsung brought over from the tablet side of the business is the S-Pen. It works in the same way as the S-Pen on the Galaxy Note 10.1 — pressure sensitivity, hover capabilities, etc. — and backed up by similar apps like S Note with handwriting recognition. Owners will also see Samsung’s Hub apps (Music, Media, etc.) and the Hybrids will be AllShare compatible. 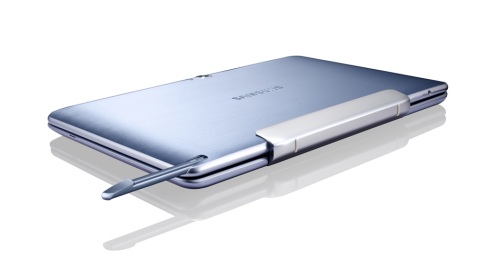 It wouldn’t be a Samsung tablet without a few tweaks to the operating system. You won’t get anything as deep as TouchWiz here (and I’m sure many people appreciate that), but the Hybrid will have something people coming from previous versions of Windows will appreciate: a Start menu.

When in desktop mode you’ll see a Start-esque launcher that offers access to all your programs and apps. I know I said hallelujah when I saw that because I’m really not down with Microsoft taking something so basic away and replacing it with live tiles of doom. You may feel differently, but you don’t have to use Samsung’s Start menu if you don’t want.

You might be wondering why the Series 7 is so much more expensive than the Series 5. Basically: the specs.

Samsung will offer up to 4GB of RAM on this model, and up to 256GB of solid state storage.

The tablet measures 0.5 inches thick and weighs just under 2 pounds.

Samsung says this tablet is aimed at pro users who are willing to pay a premium price for extra power — although that comes at the cost of battery life. The Samsung ATIV Smart PC Pro runs for up to 8 hours, which is pretty good, but not as good as the ATIV Smart PC/Series 5.

The Series 5 is more netbooky, with an 11.6 inch 1366 x 768 resolution SuperBright multitouch display, an Intel Atom Z2760 Clover Trail processor, 2GB of RAM, and up to 128GB of solid state storage.

Samsung offers the same WiFi, Bluetooth, 3G, and 4G options in this model as on the more expensive Pro model. But while the low power Atom CPU should be good enough for basic computing, it won’t offer the same kind of performance you get with a Core i5 chip.

The good news is that not only is this model cheaper than the ATIV Pro, it’s also thinner, lighter, cheaper, and gets better battery life.

The tablet alone measures about 0.39 inches thick and weighs about 1.6 pounds. Add a keyboard dock and that jumps to 0.78 inches and 3.6 pounds.

Look for these two hybrid PCs to hit shelves around October 26th when Windows 8 makes its debut.

Samsung is also introducing a $799 ultrabook with a touchscreen display called the Samsung Series 5 Ultra. It doesn’t have a tablet mode, but if you don’t mind reaching up from your keyboard to poke the screen, it’ll let you use  Windows 8 touch-based gestures.

Brad Linder contributed to this report