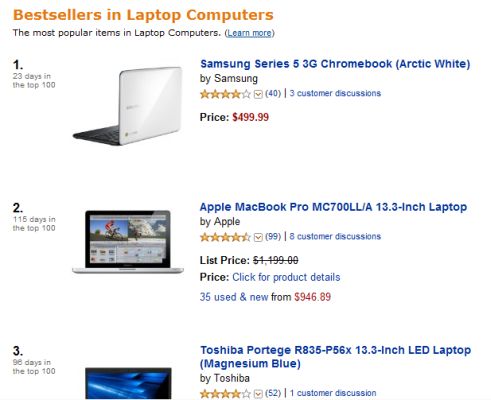 The Samsung Series 5 Chromebook is the first notebook designed to run Chrome OS. It looks like a typical thin and light laptop with a 12.1 inch display, but it boots in just 10 seconds and basically runs a single app: a web browser.

While for some folks that might be the laptop’s greatest strength, it’s also a bit of a weakness since some users may not be able to do everything with a Chromebook that they’d expect to do with a Windows, Mac, or even Linux notebook. So it’s not surprising that the Samsung Series 5 has gotten mixed reviews from journalists. In our Series 5 Chromebook review, I found a few things to like about the laptop, but overall found the $500 price tag tough to justify.

Apparently not everyone feels the same way though. The folks at Chrome OS Site noticed today that the Samsung Series 5 Chromebook is currently at the top of Amazon.com’s bestselling laptop

list. It’s hanging out in the company of a couple of MacBook models as well as Windows notebooks from Dell and Acer.

Amazon customers are generally giving the Series 4 positive reviews. More than half of the 30 user reviews show 4 stars or 5. But while some people praise the speed and ease of use of the Chromebook, a few people seem to have received defective units and some are unhappy with the keyboard, touchpad, or other physical aspects of the computer.

This is why I tend not to give ratings or scores when I review products. While I wasn’t blown away by the Sasmung Chromebook, there are clearly some people that are very happy with the product. I have a feeling we’ll start seeing similarly positive user reviews of the HP Touchpad soon, even though most tech journalists reviewing the product have offered lukewarm opinions at best.