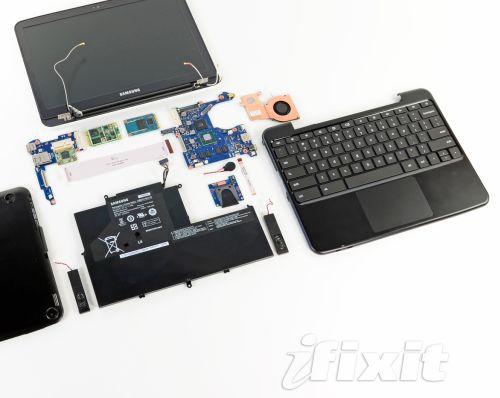 I just took my Samsung Series 5 Chromebook review unit out of the box a few hours ago, and one of the first things I noticed as that while there are a few screws on the bottom of the laptop, there’s nothing resembling an access panel for easy RAM or storage upgrades. The battery isn’t meant to be easily removed either.

But that’s not the sort of thing that’s going to stop the folks at iFixit. They got their hands on a Series 5 Chromebook today and they’ve already posted a detailed set of teardown photos.

The first step is to find all the screws on the bottom of the Chromebook — some are hidden by rubber feet. Once you’ve done that, you can remove the battery by taking out a few more screws — but this isn’t the kind of thing that you’re going to want to do every time you run out of juice, and good luck getting Samsung to sell you a spare battery.

The iFixit teardown also shows how to remove the wireless cards, solid state disk,  motherboard, and other components. Along the way we learn that the Series 5 has a 16GB SanDisk SDSA4DH-016G SSD, which is the same SSD used in the Google Chrome Cr-48 laptop. The notebook also has a Qualcomm Gobi mobile broadband chip and an Atheros AR9382 802.11n WiFi chip.

The teardown also confirms that the Chromebook has a 1.66 GHz Intel Atom N570 dual core processor and 2GB of DDR3 memory. You can find more details and photos at iFixit.