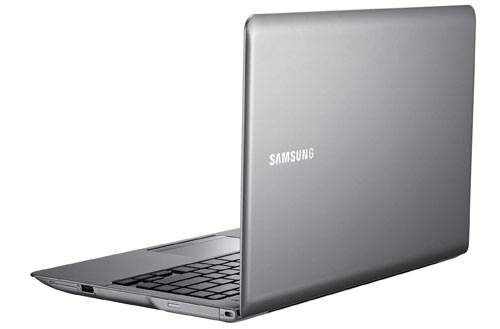 So far most laptops that have worn the “ultrabook” label have had 13.3 inch or smaller displays, solid state disks, and no optical disc drives. But Intel has been promising that we’d start to see additional form factors that are still ultrabooks including convertible tablet-style devices. Now Samsung is pushing the boundaries in a different direction.

The company has announced a new line of thin and light laptops as part of its Series 5 lineup. According to a Korean press release, the company will offer two Series 5 Ultrabook models.

The first is a Samsung Series 5 Ultrabook with 14 inch display, optical disk drive, Intel Core i5 processor and AMD HD7550M graphics. It will be available with either a 128GB solid state disk or a hard drive with up to 1TB of storage, as well as 8GB of RAM. It measures 0.8 inches thick and weighs about 4 pounds.

Weighing almost twice as much as some competing ultrabooks, and packing a disc drive, it’s arguable whether the 14 inch model is really an ultrabook at all. I doubt Intel is too happy about the AMD graphics either. Intel is the driving force behind the ultrabook platform, and the company owns the trademark on the word, which is why AMD’s upcoming answer to ultrabooks are simply called “ultrathin” laptops.

But Samsung will also offer a model with a 13.3 inch display which measures about 0.6 inches thick, weighs about 3.1 pounds and features up to 500 GB of storage space.

The Series 5 ultrabooks will be available in Korea startig later this month, with prices starting at the equivalent of about $1120.

Up until now the Series 5 name was reserved for Samsung’s Chromebook, a laptop with a 12 inch display, 16GB of storage, and Intel Atom processor designed to run Google’s Chrome Operating System.