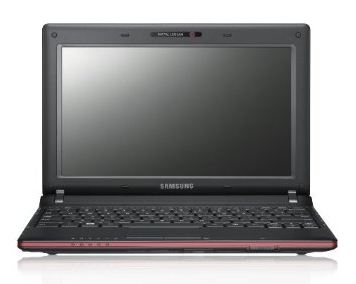 Netbooks are inherently kid-friendly laptops. They’re small and light, which means they won’t break your back if you stick them in a backpack, and small fingers aren’t a problem. And of course, arguably the first netbook, the OLPC XP Laptop was designed specifically with children in developing nations in mind, so it included easy to use software and a rugged case design.

But sometimes we see a mainstream PC maker try to take an extra step in making netbooks for children. Asus introduced a Disney-themed netbook last year with parental control software and a software suite designed for education and entertainment. And Dell had a Nickelodeon-themed model.

Now Samsung apparently wants in on the action. The company released a press release (in German) during CeBIT this week promoting a version of the Samsung N150 netbook for children. The hardware appears to be identical to the “adult” version. But the model for kids will have suite of software for children.

And that’s all fine and good. But the press release goes a bit far in proclaiming that the N150 was designed specifically for children. For instance, the matte, non-reflective display is supposed to “protect a child’s sensitive eyes,” and the keyboard is supposed to have “optimized key spacing for small hands.” In other words, it has the same not-quite-full-sized keyboard you’ll find on almost every 10 inch netbook.