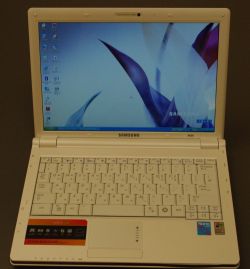 The Samsung NC20 is a bit larger to be considered a netbook, thanks to its 12 inch display. But this big brother to the popular Samsung NC10 netbook is one of the first laptops around to use the new VIA Nano processor. And it’s still pretty small by full sized laptop standards, so I was pretty excited to discover that Samsung plans to begin offering the NC20 in the US starting on March 16h.

Laptop Magazine reports that at launch, the laptop will be available exclusively from online retailer Newegg. It’s not clear how much the computer will cost in the US, but in the UK it’s selling for the equivalent of less than $500 US, so I’m guessing the price could be as low as $400 or $450 when it hits the states. Computers usually cost less on this side of the Atlantic. Update: It’s actually selling for the equivalent of about $533 in the UK, which could mean we’ll see it as low as $450 in the US, but probably not as low as $400 anytime soon.

The folks at Laptop also got their hands on a review unit and snapped a few photos if you’re interested in that kind of thing. The laptop weighs 3.4 pounds, and is substantially wider than the Samsung NC10 netbook. But it also has a roomy 1280 x 800 pixel display, and a 1.3GHz VIA Nano U2250 CPU which offers better performance for tasks like displaying HD video than you’ll find on the average Intel Atom-powered netbook.

5 replies on “Samsung NC20 coming to America – this month”