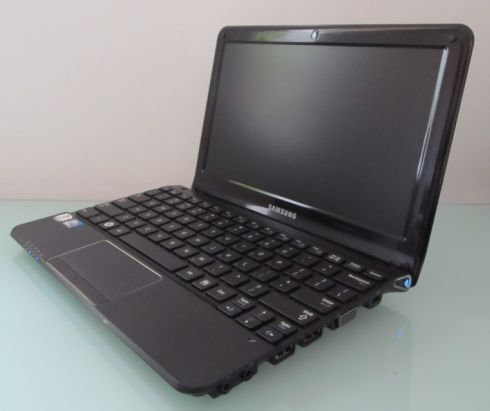 Samsung sent me a demo unit to test for a few weeks. This model has a 48Whr battery, 802.11b/g/n WiFi and Bluetooth 3.0. It’s not the fanciest 10 inch netbook I’ve tested by a long shot. But it has a decent touchpad, compact design, and a few features that you won’t often find in netbooks in this price range including decent speakers and Bluetooth.

The Samsung NC110 has a much simpler design than the wavy Samsung NF310 netbook I reviewed a few months ago. Generally that’s a good thing, because it means that while the laptop has a similar screen, keyboard, and touchpad to the NF310, the Samsung NC110 is smaller and lighter. 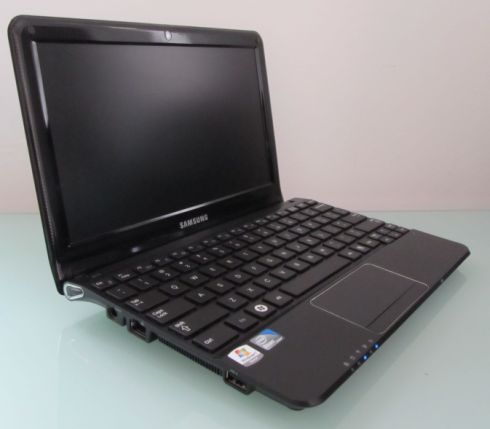 The laptop measures 10.4″ x 7.4″ x 0.97″ and weighs 2.73 pounds. Like the Samsung NF310, the new model has a matte display, but it’s a lower resolution screen. Like most other netbooks the Samsung NC110 has a 1024 x 600 pixel display which is large enough to view most web pages and run most app, but which is a little cramped if you’re trying to run two programs side by side. 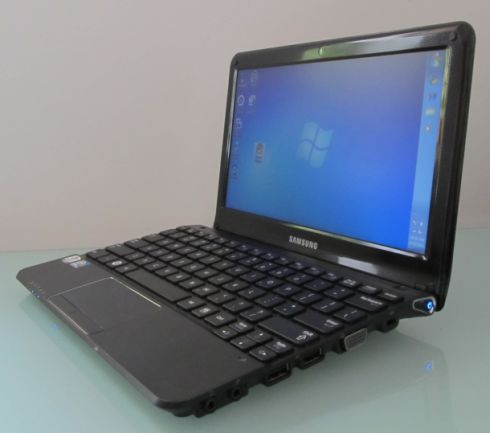 Still, matte displays are a rarity these days, with glossy displays fast becoming the norm. It’s nice to see a laptop that doesn’t reflect glare in brightly lit settings, although the screen is still difficult to read in direct sunlight. 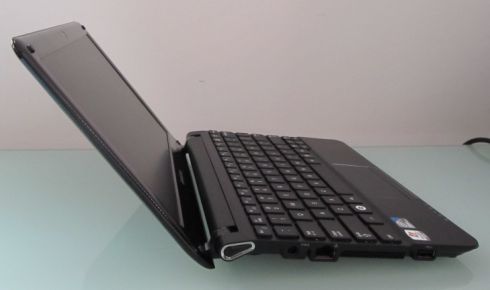 The side to side viewing angles for the screen are reasonably good, but if you tilt the screen too far back or forward colors start to wash out making pictures and videos hard to view properly. Fortunately (or unfortunately), this isn’t a huge problem as the case is designed in a way that makes it hard to tilt the screen back very far. 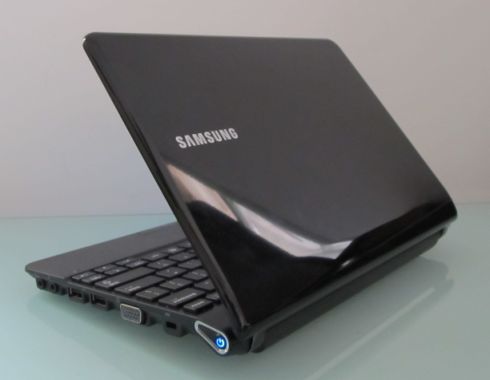 While the screen is matte, the lid of the laptop has a glossy finish, which looks pretty good when you take it out of the box. But after handling the laptop for a few days, you’ll likely start to notice fingerprint smudges all over the lid.

Around the sides of the netbook you’ll find the usual array of ports including 3 USB ports, an Ethernet port, VGA port, and mic and headphone jacks. 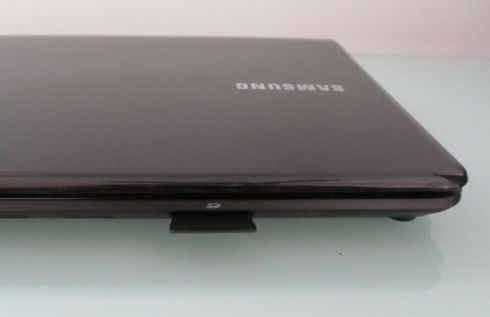 There’s an SD card slot on the front of the netbook.

The power button is placed on the right side of the notebook inside a decorative chrome element near the hinge. The first half dozen or so times I turned the laptop on I had to pause to remember which side the power button was on, because there’s a nearly identical looking area on the left side of the laptop. There’s just no power button there.

There’s a vent on the left side, and additional vents near the front just below the palm rest area. The speakers are also located near the front of the mini-laptop. 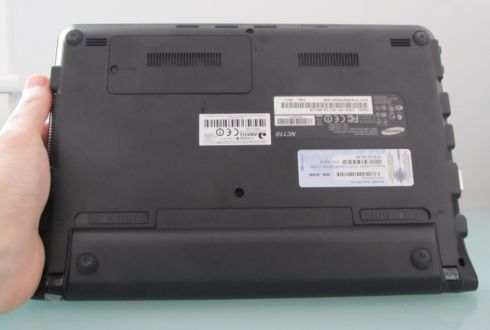 There’s a memory access panel on the bottom of the Samsung NC110, allowing you to upgrade the RAM by removing a single screw. The netbook ships with 1GB of RAM but it supports up to 2GB. 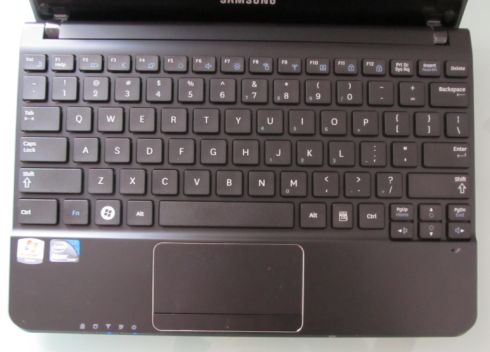 Samsung hasn’t changed its netbook keyboard design lately, and if you’ve used a recent 10 inch netbook from the company you should feel right at home. The island-style layout features small flat keys with a bit of space in between each.

There’s not a lot of surface area for each key, which could be a bit disconcerting at first, especially if you have big hands, but the gaps between keys make it easy to detect the spaces between keys without looking, and I had no problems typing at close to a hundred words per minute. 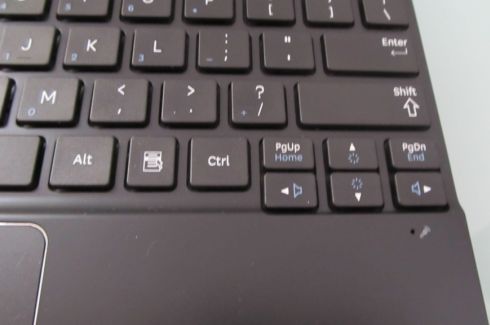 The Page Up, Page Down, and arrow keys are cramped into a tiny space in the lower right corner of the keyboard, where they can be a bit tough to hit without looking down. I especially ran into difficulty when trying to press the Home and End keys, which requires holding down the Fn key and hitting PgUp or PgDn. Because these keys are right on top of the left and right arrow keys, I regularly hit the arrow keys instead and wound up adjusting the netbook’s volume when I meant to go to the start or end of a line of text. 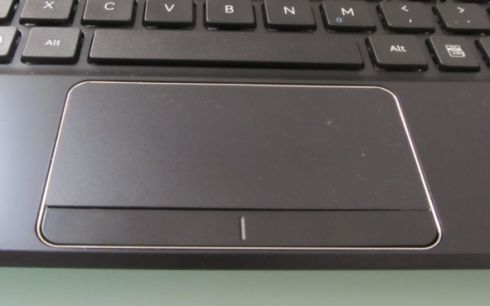 The touchpad is wide and has a nice texture which provides a little friction while you swipe your fingers. It supports multitouch gestures such as two-finger scrolling.

Below the touchpad is a single piece of plastic which functions as both a left and right button. There’s a line in the middle to help you figure out which side is which. I find that you have to push this kind of button harder to register a click than you would with some other touchpad buttons, but overall the touchpad is serviceable.

In other words, the internal hardware is virtually identical to what you’d get from almost any other 10 inch netbook in this price range, so I won’t dwell on benchmarks over CPU performance. But suffice it to say the laptop can handle standard definition video playback and some 720p HD video files. 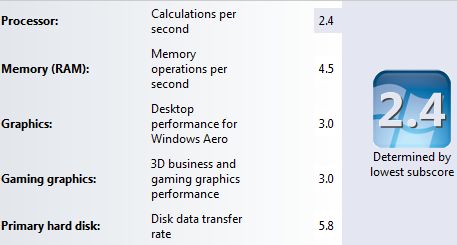 You should have no problems surfing the web with 6 or more browser tabs open. And basic multitasking performance is reasonably good. But I wouldn’t want to edit a feature-length film on this netbook. The screen isn’t really big enough, and while you could run video editing software or other CPU-intensive apps, performance will be a lot slower on this machine than on a more powerful computer.

But there are a few things that make the Samsung NC110 stand out from other 10 inch netbooks with Intel Atom processors. The laptop features the company’s Fast Start technology so that the netbook resumes from sleep a few seconds after you lift the lid.

The 3 watt stereo speakers are loud and clear and while they won’t provide a lot of bass, they’re pretty good for speakers on a small netbook.

The laptop is also fairly quiet and doesn’t get particularly warm. While there are a number of vents built into the case, the fans don’t seem to run at a high volume and you won’t feel air blowing out very often.

Samsung says you should be able to get up to 10.7 hours of run time depending on the battery configuration, but the demo unit I tested got closer to 6 hours of battery life from a 6 cell, 48Whr battery. That’s not bad, but it doesn’t even come close to the 8.5 hours or more that you’d get from some other netbooks with similar specs. 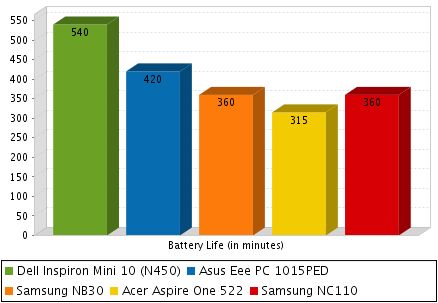 The Samsung NC110 is a solid entry in the budget 10 inch netbook space. It’s not the most powerful mini-laptop around and it doesn’t have the highest resolution display or the longest battery life. But for under $300 you get a reasonably good keyboard, an adequate processor, quiet operation, decent speakers, and a matte display.