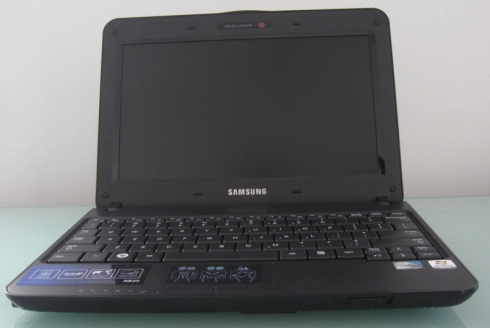 There’s a lot to like about the Samsung NB30 netbook. This 10 inch mini-laptop has a semi-rugged case design that helps protect it from scratches and fingerprints. The keyboard is spill-resistant, and reasonably easy to type on. And there’s a hard-drive sensor which shuts down the disk temporarily to protect it from damage in the event of a fall.

The Samsung NB30 also gets reasonably good battery life, although there are a number of alternatives on the market with longer-lasting batteries. And while the touchpad is decent, I was unimpressed with the mouse buttons below the trackpad.

The netbook has a wavy textured pattern across the plastic lid. It doesn’t easily show fingerprints, and the touch plastic is pretty hard to scratch, although to be fair, I didn’t try too hard to mark up the review unit. There’s a little bump at the front of the lid (or the top of the display, depending on how you’re holding the laptop) that makes the case a little easier to open and close. 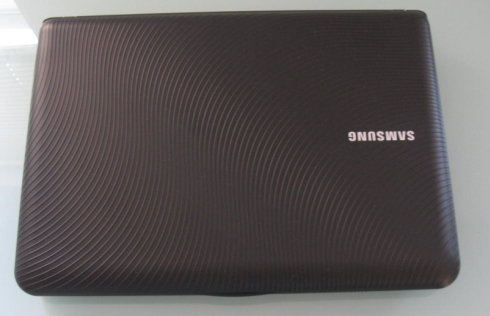 While some Samsung netbooks are available in a choice of colors, the NB30 is only available in black at the moment. 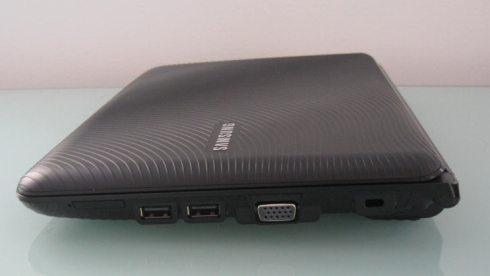 Around the sides of the netbook you’ll find your usual array of ports including 3 USB ports, Ethernet, mic, headphone, and VGA jacks, and space for a lock. 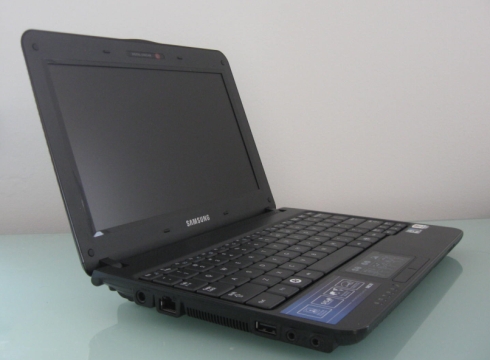 At the front of the laptop there’s a SD card reader and a power switch — which blends in well enough with the overall design of the laptop that it actually took me a second to figure out how to turn the thing on the first time.

The bezel around the display features a two-toned design, with shiny black plastic just outside the screen and a lighter, matte black surrounding it.

The screen is matte instead of glossy, which means that while some colors might not look quite as vibrant, the screen doesn’t reflect a lot of glare, and doesn’t turn into a mirror when used outdoors or in bright sunlight. 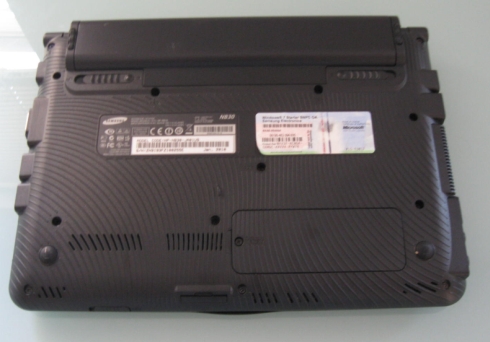 There’s a single access panel on the bottom of the NB30 which you can open up to replace or upgrade the RAM. You’ll need to disassemble the laptop if you want to perform more complicated upgrades or repairs such as replacing the hard drive or installing a 3G modem.

The 6 cell battery juts out a bit from the bottom of the laptop, which raises the keyboard a bit so that the rows on the ZXCVB line are a little lower than those on the QWERTY line. But the battery doesn’t stick out nearly as far as those on some netbooks.

The Samsung NB30 features a spill-resistant keyboard with a chiclet-style layout, meaning there are flat keys with a little space between each one. It also features a spill-resistant design, meaning you should be able to spill a glass of water over the keyboard without causing any serious damage to the laptop — a nice feature to have, but not one that I would recommend testing just because you’re bored one day. 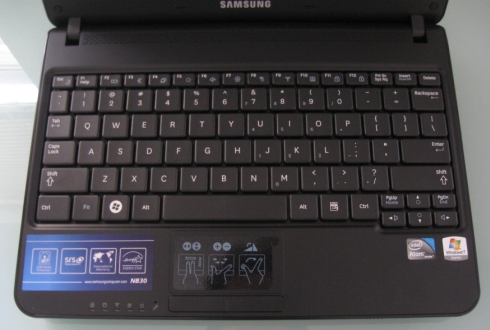 The keyboard looks virtually identical to the one on the Samsung N210 I reviewed recently — but for some reason, I did much better on a typing test with the NB30.

My guess is it’s because I’ve now spent a fair bit of time using this keyboard layout. Either way, while I scored 85 words per minute on the Samsung N210, I got a score of 103 words per minute on the NB30. That’s about as fast as I can type on any netbook — or full sized computer, for that matter, even though the Samsung NB30’s keyboard is slightly smaller than a full sized one.

The touchpad is a little on the small side, but it works reasonably well. It supports multitouch gestures, including using two fingers to scroll. 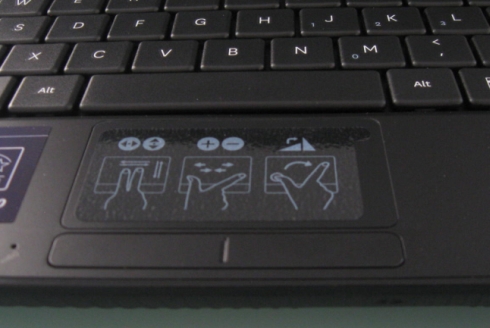 The left and right buttons below the touchpad, on the other hand, are somewhat small and a little tough to use for two reasons. First, there’s actually just one button with a divider in the middle, making it a little difficult to detect the left and right click areas without looking. And second, you have to press the button somewhat firmly or the clicks won’t register.

Like most netbooks with a 1.66GHz Intel Atom N450 processor, the Samsung NB30 offers more than enough power for basic day to day tasks such as surfing the web with multiple browser tabs open. It also supports some light multitasking and you should have no problem, for instance, editing a document while listening to music and keeping an instant messenger window open. 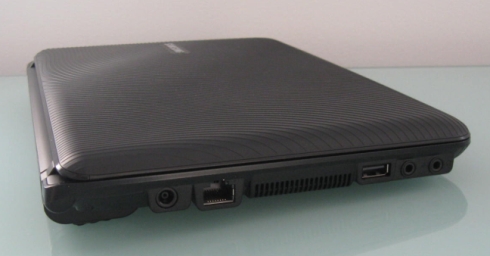 The computer can handle 720p HD video playback, but 1080p video looks like a slide show rather than a movie. The computer cannot handle HD Adobe Flash video from the web, since the processor isn’t fast enough to process the video and the integrated GMA 3150 graphics don’t offer hardware acceleration for Flash (or H.264) video. 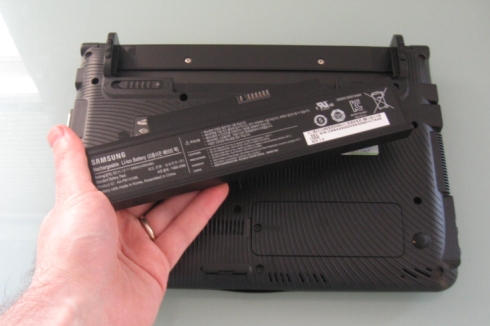 That’s not bad for a 10 inch, $340 laptop. But there are a number of netbooks available in the same price range with batteries that run for 8 to 10 hours, so if long battery life is your primary concern, there may be better options out there for you. On the other hand, if you’re looking for a somewhat durable portable computer that will run for a reasonably long time, the NB30 may do the trick. Honestly, most consumers won’t be sitting in front of their netbooks in coffee shops for longer than 5 hours anyway — but some will.

At first glance, the Samsung NB30 looks like virtually every other netbook released in the last 4 months. But it has a few special features which really do make it stand out including the scratch-resistant case, and spill-resistant keyboard which can handle up to 50cc of water as long as it’s wiped clean within about 10 seconds. 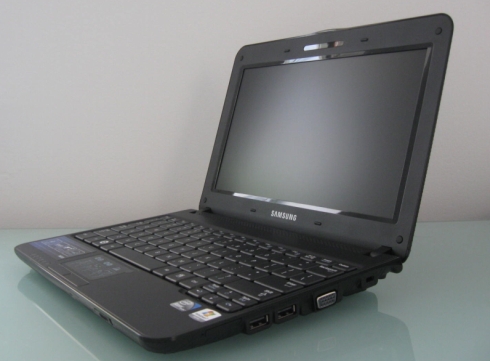 While I wouldn’t exactly call the Samsung NB30 a rugged netbook, since it’s not designed with withstand falls from great heights or major trauma, I’m comfortable referring to the mini-laptop as a semi-ruggedized netbook thanks to these features. And if that appeals to the inner klutz in you, it might be worth checking out this laptop.

That said, I’m not a huge fan of the touchpad buttons, and while $340 is still pretty cheap for a laptop, there are a number of other netbooks available for significantly less money — including several which get much longer battery life.