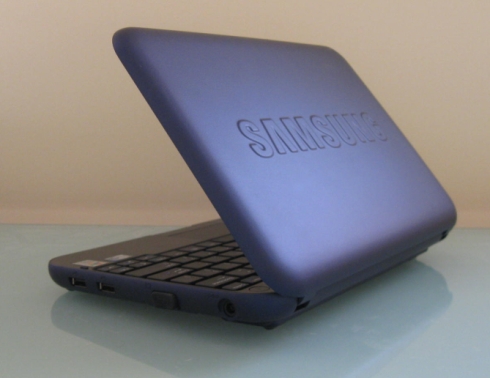 The Samsung Go is an intriguing netbook. In other parts of the world, Samsung dubs this model the Samsung N310, but in the US, the company calls it the ‘Go” to emphasize its portability and mobility features. But honestly, there’s not much to set the Samsung Go apart from other netbooks in its class. It’s not the cheapest, it doesn’t have the biggest keyboard, the best battery life or the fastest processor.

But you know what? There’s something very compelling about the Go, because it’s rubberized case, good keyboard and attractive screen just make the netbook feel good to use. It also does get very respectable battery life while offering performance that’s on par with what you’d expect from an Intel Atom based netbook.

The number one thing that sets the Samsung Go apart from just about every other netbook on the market is its rubberized case. Notice I said rubberized, and not ruggedized. There is a difference. A ruggedized laptop is usually thick and heavy and includes special design elements that let you drop it from a great height step on it, or abuse it in other ways without causing serious damage. The rubberized case on the Samsung Go won’t do that. But it does provide a little extra protection against scratches and scuffs, and it’s surprisingly attractive. 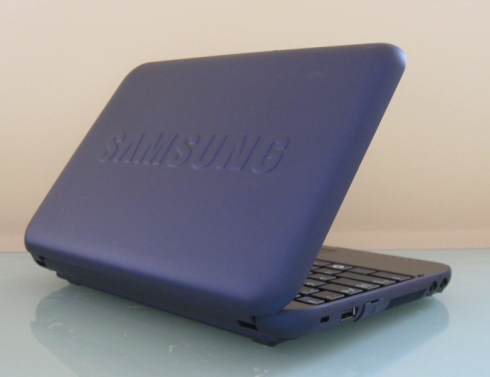 When I first saw photos of the Samsung N310, I thought he case looked a bit like a toy. But up close, it’s actually quite nice looking. The model reviewed here is the “midnight blue” version, but it’s also available in “sunset orange” and “mint blue.” 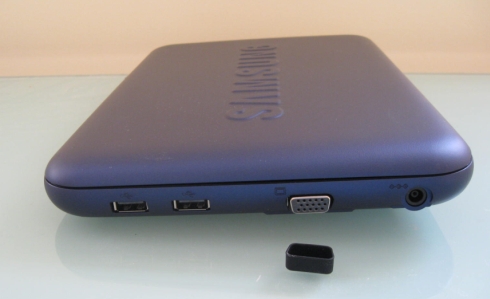 Like most netbooks, the Samsung Go has 3 USB ports, mic and headphone jacks, a VGA port, Ethernet jack, and SD card slot. The Ethernet port is protected by a plastic cover, and there’s a rubbery cap that covers the VGA port. The VGA cap looks like it’s just asking to be lost, but since most netbooks don’t have a cover for this port at all, it probably wouldn’t be the end of the world if you did misplace it. 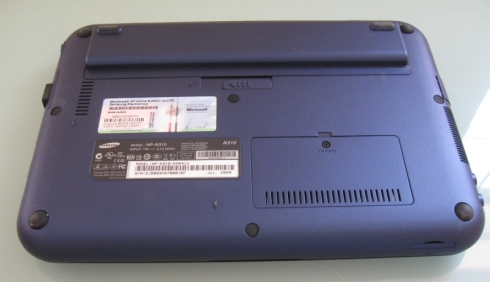 There’s a single access panel on the bottom of the netbook that you can remove to upgrade or replace the RAM. The battery doesn’t quite sit flush with the unit, but it doesnt’ stick out very far either.

One odd design choice that’s drawn a fair bit of attention is the huge Samsung logo emblazoned across the lid. I kind of got used to it after a little while, but if you’re opposed to carrying around a Samsung billboard with you everywhere you take your computer you’ll either want to find another netbook or find some way to tastefully cover the lid with stickers of your favorite bands or something.

When you close the lid, the rubberized case forms a rounded edge all the way around the netbook, which would actually make it difficult to open (because it would be hard to get a grip) if it weren’t for a small indent near the front of the netbook. 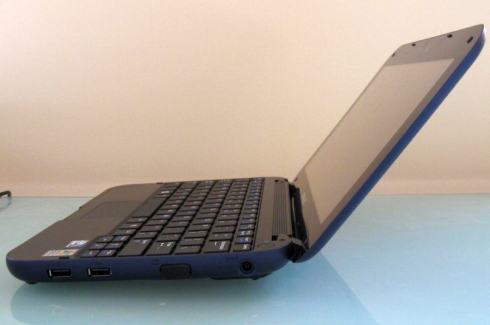 The screen tilts back a bit further than those found on some netbooks, but beause of the location of the hinge, it won’t open as far as some netbooks like the Asus Eee PC 1000HE.

The Samsung Go features a chiclet-style keyboard that stretches pretty much from one edge of the netbook to the other. There are two full sized shift keys, and the arrow and page up/down keys are located below the right shift key so you won’t accidentally hit them when you’re trying to capitalize a letter. 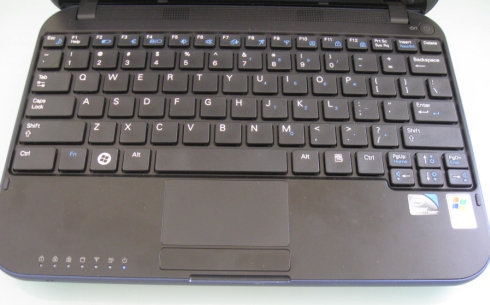 There’s a little space between each key, which makes it easy for touch-typists to find the correct keys with their fingers. But I was a bit surprised when I ran a recent typing test to find that my typing speed actually dropped when using this keyboard. I found I could type at nearly 100 words per minute using the Gigabyte TouchNote T1028X or Lenovo IdeaPad S12, but my top speed with the Samsung Go was about 81 words per minute. This may just be a matter of taste and your results may vary, but while the keys are all in the perfect positions, I think the chiclet-style keyboard may actually slow me down. 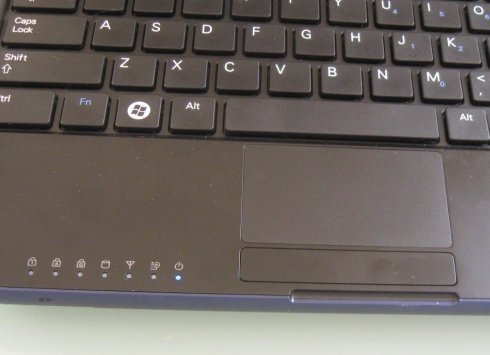 The touchpad has a nice textured feel to it, and it’s set just a tiny bit lower than the rest of the palm area, which makes it easy to detect the edges with your fingers. There’s a single button below the touchpad. While I generally prefer two separate buttons, the single button does look nicer, and I didn’t have any problems clicking the left and right sides.

There’s no support for multitouch gestures, but the touchpad does support scrolling gestures by moving your finger up and down the far right side of the pad.

The Samsung Go has a glossy display with a piece of glass that stretches from edge to edge. This doesn’t mean the screen is edge to edge, there’s still a fairly large bezel around the viewing area. It’s just covered by glass. 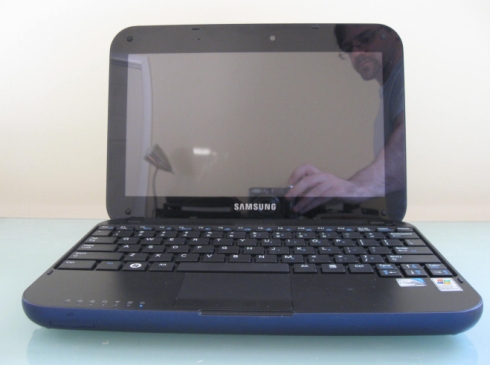 The effect is rather attractive, but the glossy screen does turn into a bit of a mirror in brightly lit conditions. The mirror effect is most pronounced when the computer is off. When the brightness is turned up, the display is fairly easy to use in most indoor settings.

You can adjust the screen brightness by holding the Fn key and hitting the up or down arrows. There are 8 different brightness settings. The lowest makes the screen practically unreadable unless you’re sitting in a dark room, while the brightest should be comfortable in most situations.

One of the Samsung Go”s selling points is its high capacity 6 cell, 8850mAh battery. As a Samsung representative recently told me, while most PC makers outsource their battery technology, Samsung makes the batteries that go in its netbooks itself. Even with the high capacity battery, the Samsung Go weighs just about 3 pounds. 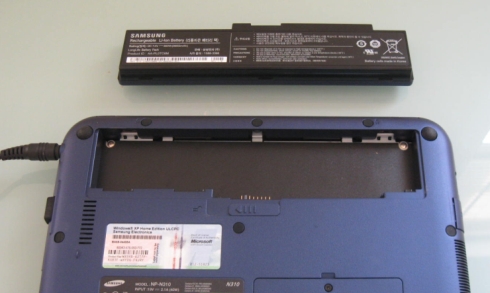 While the folks at Laptop Magazine found that the battery lasted for over 8 hours, my results were a bit less impressive. The laptop ran for about 7 hours and 10 minutes when I tried to use it for a full day for a variety of tasks including web surfing and writing documents. During this test the WiFi was on, and the brightness was set to about 60%.

I also ran the Battery Eater Pro classic test, which puts constant strain on the CPU until the computer runs out of juice. In this test, the Samsung Go lasted for 5 hours and 8 minutes.

These scores are certainly above average for a netbook, and I think most computer users would be happy with a 7 hour battery. But a handful of netbooks including the Asus Eee PC 1005HA and Toshiba Mini NB205 have been widely reported to get better battery life. When I ran the same Battery Eater Pro test on the Eee PC 1005HA, it held out for 6 hours and 15 minutes. 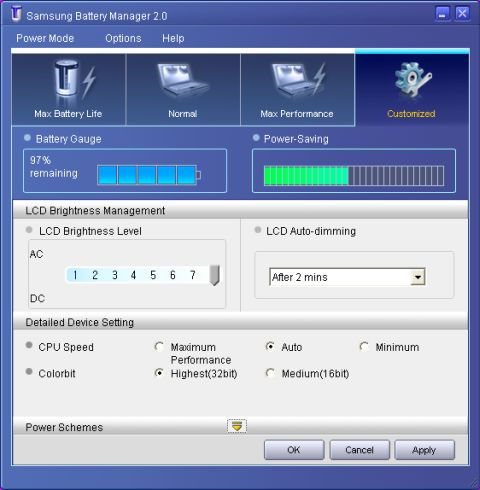 I should point out that in both the BE Pro and real world tests, I did disable most of the Samsung Go’s power saving features. There’s Samsung Battery Manager utility that lets you adjust the screen brightness, auto-timming, CPU speed, color depth, and other power management features. In order to make sure the computer didn’t go to sleep during the test, I disabled these, so it’s likely that you could get the computer to run a bit longer if you leave the power management features enabled.

In addition to the Battery manager application, Samsung load the Go with a handful of other applications, most of which help take advantage of the netbook’s hardware. For instance, there’s an SRS Control Panel which lets you adjust the behavior of the builtin speakers, which are located just above the keyboard. 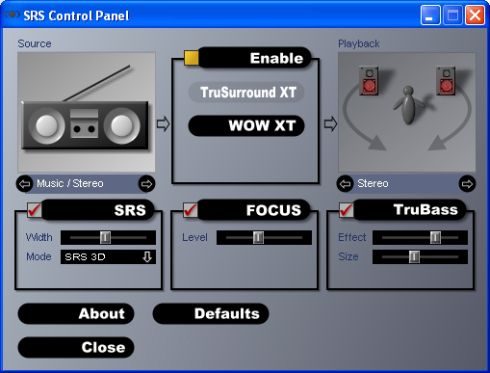 The computer also comes with CyberLink YouCam, a webcam utility that lets you take pictures, shoot video, and add a variety of (mostly silly) effects. 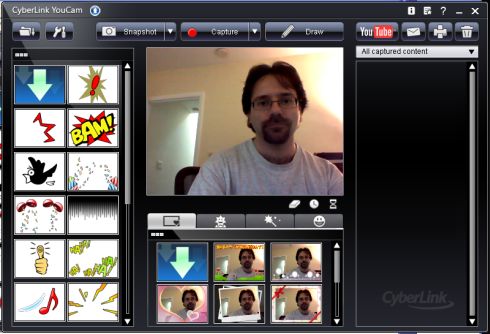 One of the more useful utilities is a backup and restore utility called Samsung Recovery Solution. When you first boot the netbook, this program will ask if you’d like to make a complete backup of your computer’s state which you can restore at a later. 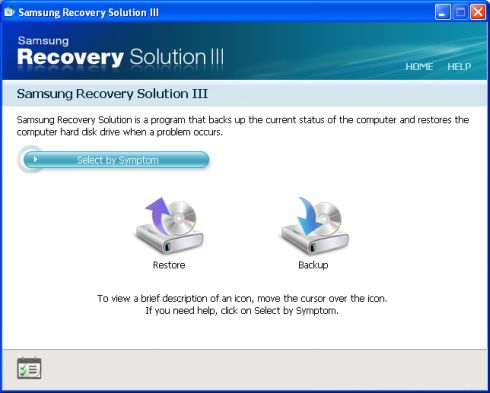 There’s also an update manager that checks the Samsung server for updates for your system and makes it easy to keep your computer’s software and drivers up to date. Other utilities include a Battery mode extender which charges your battery to just 80% to help prolong its useful life, a screen resolution switcher, a network manager, and the Samsung Magic Doctor which diagnosis your computer for problems and recommends fixes. The Magic Doctor can also restore the computer to its factory default settings.

The Samsung Go has a 1.6GHz Intel Atom N270 processor, 1GB of RAM, and a 160GB hard drive. If you’ve used one netbook with these specs, you pretty much know what to expect. The computer does an excellent job of performing light weight tasks like web browsing, listening to music, or watching videos (as long as they’re 720p resolution or lower). I just wouldn’t recommend this system for any heavy duty tasks like editing long videos. 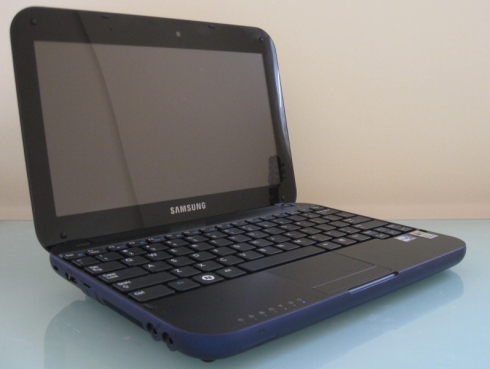 The speakers are reasonably loud for a netbook, which is to say they’re still somewhat quiet. If you plan on using the Samsung Go to blast music, I’d recommend getting a set of external speakers. But the sound quality is quite good, and thanks to the SRS Control Panel utility, you have quite a bit of control over the sound quality.

The included backup and restore software, update manager, and battery management utilities are nice touches, which help this computer perform about as well as any Intel Atom N270 powered netbook I’ve used.

The Samsung Go has excellent build quality and comes with a nice suite of applications, most of which are actually quite useful, unlike the bloatware that comes with many PCs. The keyboard is well laid out and features large keys, and the touchpad is quite comfortable as well. But the Samsung Go is priced significantly higher than most netbooks with nearly identical specifications. The list price for this computer is $479. And even though you can often find it for much less than that, it still costs $50 to $100 more than many similar netbooks. 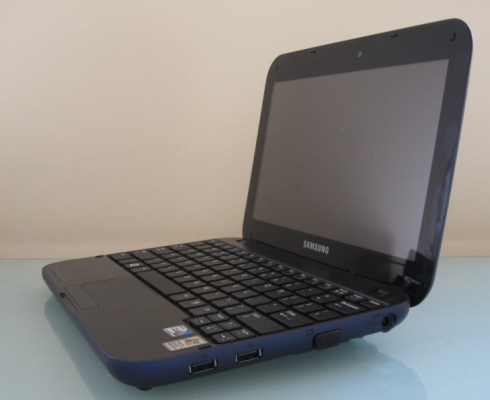 Is it worth the extra money to get a machine with nice build quality, a better-than-average battery and Samsung’s software suite? I guess that depends on how much money you’ve got burning a hole in your pocket. Fortunately, if there’s one thing I’ve learned about netbooks over the past few years it’s that prices drop at a surprising rate. The Samsung Go was launched pretty recently in the US. It might not be that long before it’s priced more competitively with similar netbooks from other companies including Asus, Toshiba, Acer, and MSI.