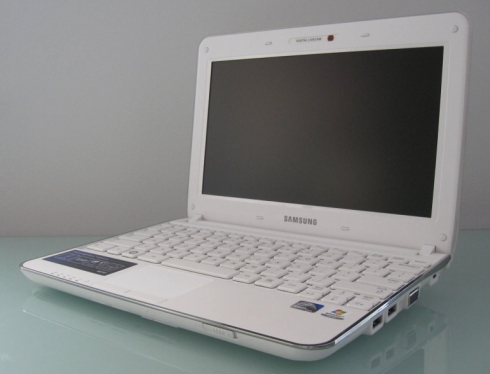 The Samsung N210 isn’t the thinnest or lightest netbook around. And it doesn’t have the longest lasting battery, lowest price, or fastest processor. In fact, it’s hard to supply any superlatives for this mini-laptop.

But don’t let that fool you. Because the Samsung N210 is a fine example of a netbook with an attractive case design, above average keyboard, and a few features that you don’t find very often including a matte, non-glossy display and a fingerprint-resistant case.

The laptop runs Windows 7 Starter Edition. It’s exclusively available in the US at Best Buy, where you can pick it up for $379.99.

One of the netbook’s most distinguishing characteristics is the lid. It features a textured pattern on a white background, which is covered by a clear plastic shell. It gives the lid a three dimensional look, at the plastic does a good job of hiding fingerprints. 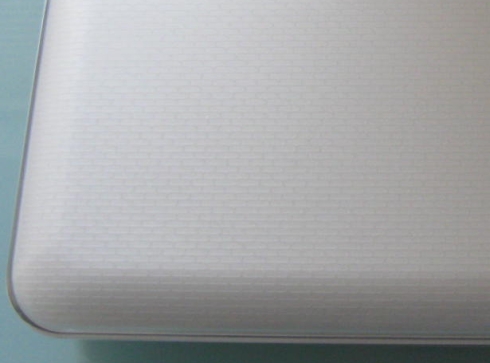 The base of the laptop features a strip of chrome around the keyboard, giving the Samsung a bit of extra flare — much like Samsung’s first netbook, the NC10. 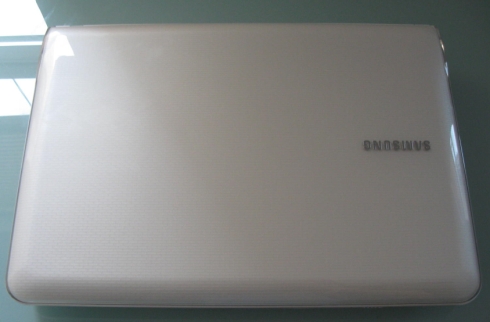 There’s a fairly large bezel surrounding the 10.1 inch, 1024 x 600 matte display. The netbook’s webcam is located just above the display, and features a red circle around the camera and a helpful label that says “DIGITAL LIVECAM.” My wife commented that the netbook appears to look a little like it was designed for kids, thanks to the thick bezel and overall plasticky feel, but having spent some time with kids’ netbooks, the Samsung N210 feels like to me like it was built for grownups. 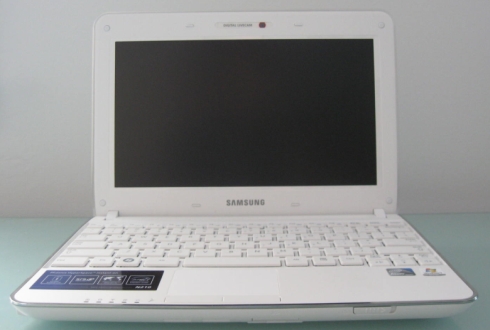 The matte display is worth singling out. Most netbook makers have opted for glossy displays which look great — when used indoors and away from direct line of site of a bright light. Stick the netbook outdoors or too close to a lamp and a glossy screen starts to look like a mirror. That’s not the case with the Samsung N210.

While I wouldn’t say the screen looks great outdoors, it doesn’t reflect sunlight and turn into a mirror. It just starts to look washed out and harder to read when used outdoors. The viewing angles are pretty good as well. While the colors change a bit when you tilt the screen too far back or view the laptop from the side, you can still read text even when looking at the netbook from an awkward angle.

There are a series of status LEDs on the left side of the computer near the touchpad, which means there’s a good chance our hand will cover up them as you type.

While most netbooks tend to put the power button above the keyboard, the Samsung N210 has a power switch on the front right side of the computer. It actually took me a moment to figure out how to turn on the laptop when I first took it out of the box. There’s also an SD card slot on the front of the unit. 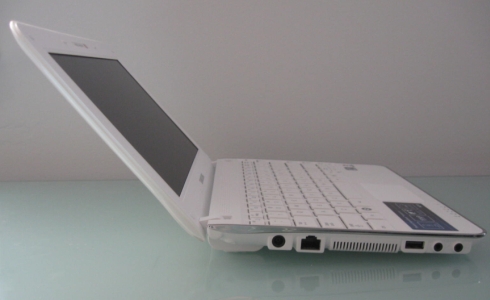 On the left side of the Samsung N210, you’ll find the power jack, mic and headphone jacks, an Ethernet port and a USB port. 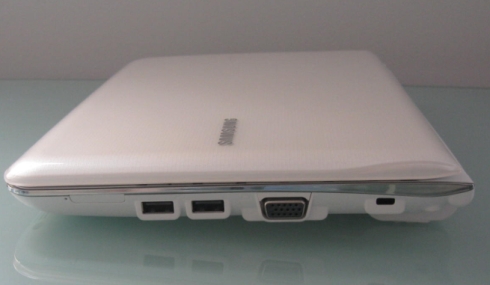 There are two more USB ports, a VGA output, and a lock port on the right side. 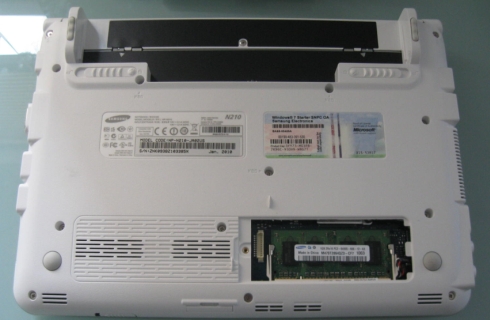 The bottom of the netbook has a single access panel which you can open up to replace or upgrade the RAM. I was a bit confused by this at first, since it actually looks like there are two access panels. There aren’t. To the right of the access panel there’s another screw — but it’s just one of 13 screws you need to remove in order to disassemble the laptop if you want to replace the hard drive or other internal components.

The Samsung N210 has an island-style keyboard with flat keys and a decent amount of space between each key. The keys also have slightly rounded edges, giving them an almost bubble-like look. 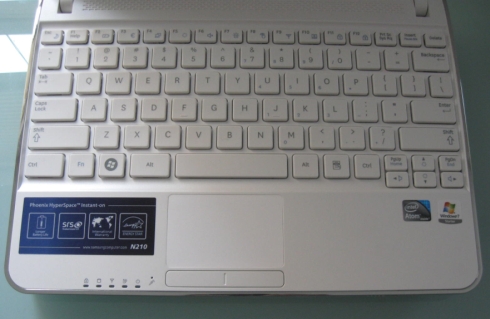 I think the keyboard is quite attractive, but I found that it’s not the easiest keyboard to type on. Your results may vary, but I found I was a bit slower and less accurate with the Samsung N210 keyboard than I have been with other isolation-style keyboards including the ones on the Asus Eee PC 1005PE and Toshiba Mini NB205. In an online typing test, I managed about 85 words per minute on the Samsung N210, which is about 10-15 words per minute slower than my usual score.

I could be wrong, but I feel like the problem might be that the keys are a little too small and the distance between the keys is a little to large.

The laptop does offer a decent array of Fn keys which allow you to perform common tasks such as dimming the display, adjusting the volume, toggling the wireless, or putting the computer to sleep using keyboard shortcuts. 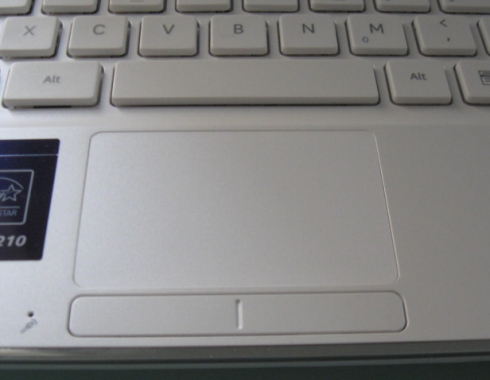 You can perform multitouch gestures such as 2-finger scrolling on the touchpad. And while it sits almost flush with the palm rest area of the laptop, there is an edge to the touch area that you can detect with your finger without looking down from the screen.

There’s a single button below the touchpad with a rocker in the middle, making it easy to make right and left clicks. At a time when many netbook makers are moving to integrate the touchpad buttons with the touchpad itself — which can lead to all sorts of usage problems, I’m happy Samsung found a way to squeeze the buttons in below the touchpad — even if I would have preferred two separate buttons, a wider touchpad, and slightly more sensitive scrolling.

The more netbooks I test with Intel Atom N450 Pine Trail processors, the harder it gets to write something original in the performance section. The specs tend to be virtually identical, with the same processor and graphics and similar RAM, hard drive, and operating system details.

The computer gets a Windows Experience Index of 2.4, with the processor and graphics predictably holding the lowest subscores.  The hard drive is surprisingly zippy with a 5.9 index score.

In practical terms, I had no problem using the Samsung N210 to surf the web with multiple Google Chrome browser tabs open. With up to 10 tabs open, I didn’t notice any overall slowdown in performance. While you can use the netbook to watch Flash video, 720p and higher resolution Flash video looks like a slideshow — even with the latest version Adobe Flash Player 10.1 beta, because there’s no hardware acceleration for the netbook’s Intel GMA 3150 graphics.

Like most Intel Atom N450 netbooks, the Samsung N210 offers enough power for watching some videos, editing documents, surfing the web, chatting, or even doing some image editing and other tasks. But if you’re looking for a hardcore machine for gaming or performing other CPU intensive tasks, you should probably look elsewhere.

The N210 also features Phoenix HyperSpace quick boot software. HyperSpace is a light weight Linux distribution that boots in about 10 seconds, allowing you to get online and surf the web, send instant messages, or perform a handful of other tasks without waiting for Windows to boot. HyperSpace is an alternative to the Splashtop software Asus, Lenovo, and several other companies offer on their netbooks.

Samsung says the N210 should get about 7 hours of battery life. That might be true if you dim the screen and turn off the wireless. But with the screen brightness set to about 50% an WiFi enabled, I was about to squeeze 6 hours and 6 minutes out of the 48Whr battery.

Watching video or playing games will likely run down the battery faster.

6 hours of run time is pretty good, but there are a number of netbooks on the market with similar specs and price tags that can run for nearly twice as long. I’ll leave it for you to decide whether there’s a practical difference between a 6 hour and 10 hour battery based on the way you plan to actually use your netbook.

The Samsung N210 features an attractive design, a decent touchpad and good, but not great battery life. While I’m not a huge fan of the keyboard, I did find the laptop to be about as snappy and responsive as any Intel Atom N450 Pine Trail-based netbook I’ve used. 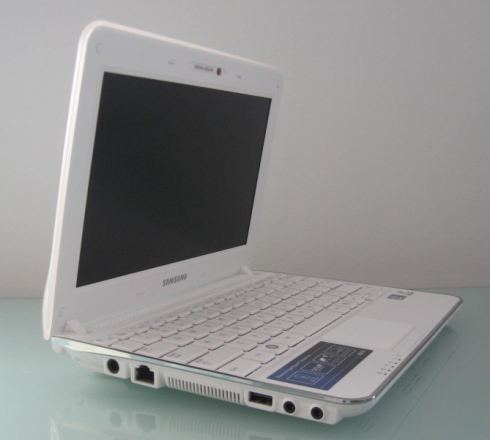 The only real problem I see is that at $379, the Samsung N210 is a little pricey. Acer, Asus, MSI, and other netbook makers are offering models with nearly identical specifications for as much as $50 cheaper.

It’s possible that Best Buy could decide to lower the price of the Samsung N210 soon, or Samsung may work out deals to bring the netbook to additional retailers who could adjust the price. And at that point, I’d definitely consider looking at the Samsung N210 if you’re in the market for a 10 inch netbook.

It’s worth noting that along with the N210, Samsung recently launched several other models including the semi-rugged Samsung NB30 with a spill-resistant keyboard and the Samsung N150 which is a little more plain looking, but which sells for just $329 at Amazon