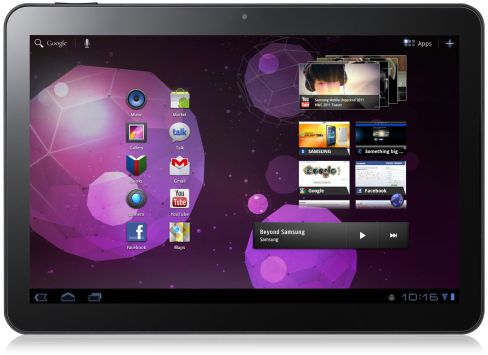 On paper the Samsung Galaxy Tab 10.1 looks pretty good when compared with Apple’s recently unveiled iPad 2. Both machines have 10 inch displays, dual core processors, and the latest tablet-friendly operating systems (Android 3.0 and iOS 4.2). In fact, you could make the case that the Tab looks even better on paper thanks to the higher resolution 1280 x 800 pixel display, flash card reader, and high resolution 8MP camera.

But the iPad 2 has at least three things going for it:

At launch, the 7 inch tablet ran about $600, with discounted pricing if you signed up for a 3G mobile broadband contract. Today it’s much cheaper.

It’s too early to tell what this means in terms of real-world pricing. Samsung hasn’t officially announced the price for the Galaxy Tab 10.1, but Vodafone has been making noise about offering it for between €349 to €699 in Europe. Hopefully this means the price could drop a bit before launch, although I wouldn’t be shocked if Yonhap News is taking the Samsung’s execs out of context.

The exec also reportedly said Samsung needs to “improve the parts that are inadequate,” but I doubt that means the company will be pulling the Galaxy Tab 10.1 off the assembly line to retool the tablet before launch. It’s more likely that he’s talking about making sure the company’s next tablet is designed to keep up with the Apples.

One reply on “Samsung may lower the Galaxy Tab 10.1 price in response to the iPad 2”