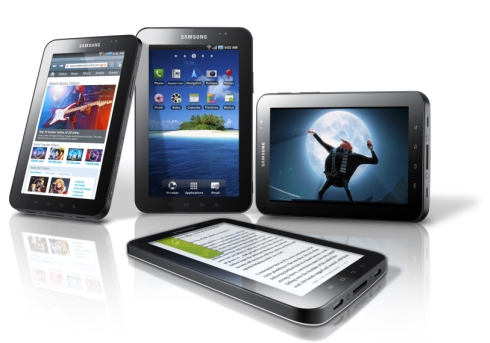 The Samsung Glaaxy Tab has a 1GHz Samsung Hummingbird processor, a 1024 x 600 pixel TFT touchscreen display, and it will run Google Android 2.2. It has two cameras, one facing the front and another facing the back. Not only is the Galaxy Tab the first Android tablet to be announced for all four major US wireless carriers, but it’s also one of the few Android tablets to ship with full access to the Google Android Market — because in a lot of ways it’s really just a large smartphone, calls and thus meeting Google’s requirements for Android Market access.

Samsung will offer a series of accessories including a Bluetooth keyboard, a docking station with HDMI output, and a car dock which you can use to turn the Galaxy Tab into a 7 inch GPS and entertainment unit.

We’re still waiting for pricing, which will be set by wireless carriers. The tablet will arrive in time for the holiday season, and possibly sooner. Samsung also promises to release a WiFi-only version of the Galaxy Tab “in the future.”

Update: The US version of the Samsung Galaxy Tab will not be able to make phone calls. At launch, the US versions will also have 3G and WiFi capabilities, but there won’t be a WiMAX version for Sprint or any other carrier.

You can check out some images from the Samsung Galaxy Tab launch event after the break.