The Samsung Galaxy S10 is a 6.1 inch smartphone with three cameras on the back, an in-display fingerprint sensor, and a hole-punch display with a front-facing camera in the upper right corner of the screen.

The Samsung Galaxy S10+ is a 6.4 inch version with dual front-cameras. It also has a bigger battery and support for more RAM and storage than its (slightly) smaller sibling.

Both phones should be available in the coming weeks. At a time when most phone makers are chasing the dream of a bezel-free, all-screen phone, it’s not surprising to see Samsung jump on board. But while a few companies are going a bit further and eliminating ports and buttons, Samsung seems to remain committed to them — the Galaxy S10 series phones still have 3.5mm headphone jacks as well as USB-C ports.

Samsung says in order to minimize the space the hole-punch cameras take up, the company put the sensors and other circuitry behind the display.

As for the display itself, is a “Dynamic AMOLED” display with support for HDR+. Samsung says it’s the most color accurate display ever released for a smartphone. On the back of the phone, both phones feature three cameras:

One other new (for Samsung) feature? Support for two-way wireless charging. Not only can you place a Galaxy S10 or Galaxy S10+ on a charging pad to refuel the built-in battery, you can also use the phones as wireless power banks to top up the battery in other gadgets. 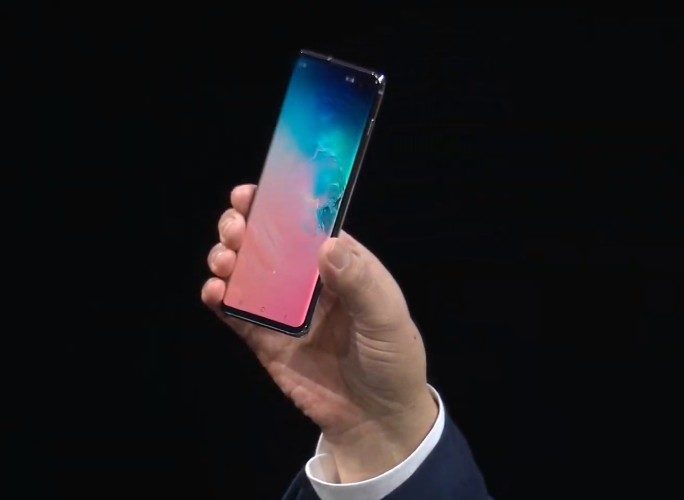 That means you can charge another phone by placing it on the back of a Galaxy S10. Or you can recharge a set of wireless earbuds (like Samsung’s new Galaxy Buds) the same way.

Samsung also has a larger, higher-priced, and higher-specced Ceramic model with support for up to 12GB of RAM, and 1TB of storage.

There are also two other versions of the phone: a cheaper, smaller Samsung Galaxy S10e with a 5.8 inch screen and an FHD+ display and Samsung Galaxy S10 5G model with a 6.7 inch display, quadruple rear cameras, and… no microSD card reader.

The Galaxy S10 series smartphones will be available in stores starting March 8th and pre-orders open on February 21st. Prices start at: