But it’s probably Samsung’s software that really helps set the Samsung Galaxy S III apart from some of the other best Android phones on the market including the HTC One X and Samsung Galaxy Nexus. 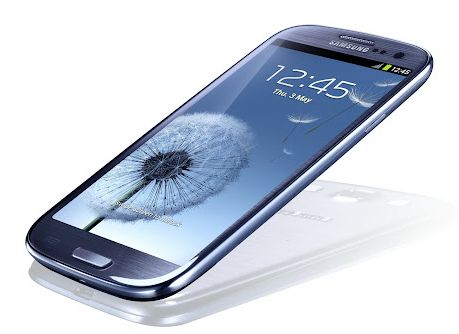 Samsung developed software called Smart stay that allows the phone to actually watch your eyes. As long as your looking at the phone, the screen will stay on. Only when you look away or close your eyes will it turn off. So you don’t have to worry about the screen going dark when you’re reading a web page or eBook.

S Voice software supports voice input commands. You can tell the phone to snooze an alarm, play a song, adjust the volume, open an app, or send an email using what Samsung says is a “natural language user interface.”

In other words, this is Samsung’s answer to Apple’s Siri, with support for 8 languages including English, Spanish, and Korean.

There’s also a “direct call” feature which uses the proximity and motion sensors to let you quickly dial a number. If you’re viewing a contact or composing a text message, all you have to do is lift the phone to your face to dial a call.

Samsung has also developed an S Beam feature that buidls on Google’s Android Beam by allowing users to share files quickly between phones over a direct phone-to-phone WiFi connection. That means you can share data without a WiFi or cellular signal.

The same technology lets you mirror your data to a TV or other display, so you can play a game or display a presentation on a larger screen.

Buddy photo share is a borderline creepy facial recognition apps. When you snap a photo with the phone’s camera, it can automatically detect faces and if you took a picture of someone in your contact list, the phone can automatically share the picture with that contact. 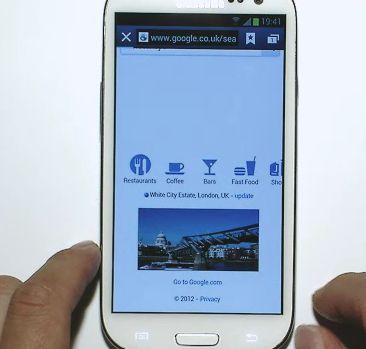 Pop Up Play is a feature that takes advantage of the large screen by letting you continue watching a video even while you’re doing something else. When you enable this feature a small video window will pop up and you can position it anywhere on the screen while using a different app. So you can surf the web while watching a video.

Samsung says the S III has a thinner bezel than its earlier phones, so that the handset isn’t much larger than the Galaxy S II despite the move from a 4.3 inch display to a 4.8 inch screen.

Samsung will begin offering the Galaxy S III in Europe on May 29th, 2012. It will be available in North America, Japan, and Korea this summer. All told, Samsung plans to make the phone available in 145 countries and on 296 mobile carriers.

The company will also offer a range of accessories including a wireless charging station.