Samsung is updating its Galaxy Camera lineup with a new model sporting a more powerful processor and a bigger battery.

Like last year’s Gallery Camera, the new Samsung Galaxy Camera 2 is basically a point-and-shoot camera with a zoom lens and Android software. But the new model has a new design, a bit more power, and a few other tricks. 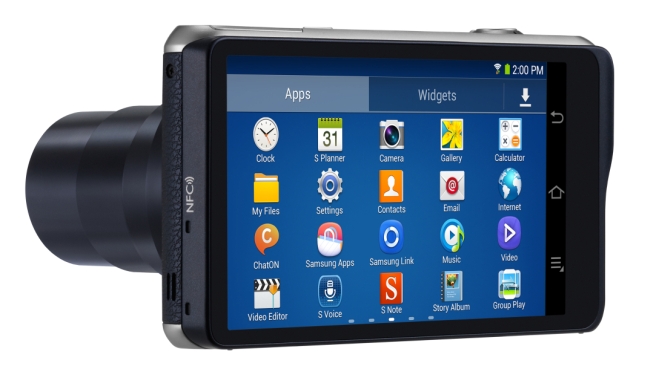 The Samsung Galaxy Camera 2 basically has the guts of an Android smartphone combined with a decent point-and-shoot camera. It sports a 1.6 GHz quad-core processor, 2GB of RAM, and 8GB of storage. There’s also a microSD card slot that supports up to 64GB of removable storage.

It runs Android 4.3 Jelly Bean with Samsung’s TouchWiz software, and features a 4.8 inch HD touchscreen display. Wireless options including 802.11a/b/g/n WiFi, Bluetooth 4.0 and NFC. It also supports GPS and GLONASS and has a 2000mAh battery.

Camera features haven’t changed much. The camera still has a 16MP image sensor and a 21X optical zoom. One thing that has changed a bit is the design — instead of smooth plastic, the sides of the camera are wrapped in a textured fake leather material that looks similar to what Samsung uses for the Galaxy Note 3 and Galaxy Tab 10.1 2014 Edition.

Samsung hasn’t yet announced the price or release date — but since this camera will replace last year’s model, it’ll probably sell for about the same price, which should be around $450 and up (or even less if you find one on sale).