As expected, Samsung is launching its first smartphone to feature four cameras: one on the front, and three on the back.

The Samsung Galaxy A7 is a phone with upper mid-range specs that just happens to be the company’s first phone with a triple camera system… although rumor has it the feature may eventually find its way to Samsung’s premium Galaxy S series in the future.

Samsung is holding an official launch event for the Galaxy A7 in Malaysia on October 11th. There’s no word on the price or global release date for the phone. 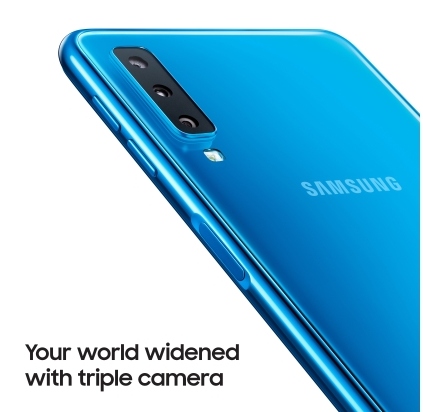 The smartphone has a 24MP front-facing camera with an F2.0 aperture, but it’s the rear cameras that are probably the most interesting things on this phone. They include:

Samsung says the depth camera helps you snap shots with adjustable depth effects, including portrait-style photos where the foreground stays in focus while the background is blurred. The wide-angle camera… lets you snap wide-angle photos. And the primary camera supports low-light photography by combining data from four pixels into one pixel in dark environments.

The Galaxy A7 isn’t the first triple-camera phone we’ve seen. Huawei’s P20 Pro has three cameras (a 40MP primary camera, a 20MP mono lens, and an 8MP 3X telephoto lens). The upcoming LG V40 ThinQ is also expected to have a triple camera system on the back and dual cameras on the front. And eventually we may see phones with as many as 9 different rear cameras.

But it’s still unusual enough to be noteworthy… particularly when the first Samsung phone with the feature isn’t necessarily a flagship device.

The Galaxy A7 certainly has decent specs. But it has a lower resolution display and lacks the curved glass screen found on Samsung’s Galaxy S and Galaxy Note devices.

It ships with Android 8.0 and supports NFC, although Samsung says NFC support may vary by country.

The Galaxy A7 will be available in several different configurations:

Pricing hasn’t been announced yet, but Samsung says the phone “will be available in select European and Asian markets” starting this fall, and will expand to other markets “in the near future.”

rear camera system includes a 24MP primary lens, a 5MP depth lens, and an 8MP wide-angle lens that work together to let you adjust depth of field and/or shoot wide-angle photos.