Samsung has introduced a new developer board based on the company’s new Exynos 5 processor. That’s the same dual-core ARM Cortex-A15 chip that powers the recently released Samsung Chromebook.

Interestingly, the new Arndale developer board has the same price tag as that Chromebook: $249. 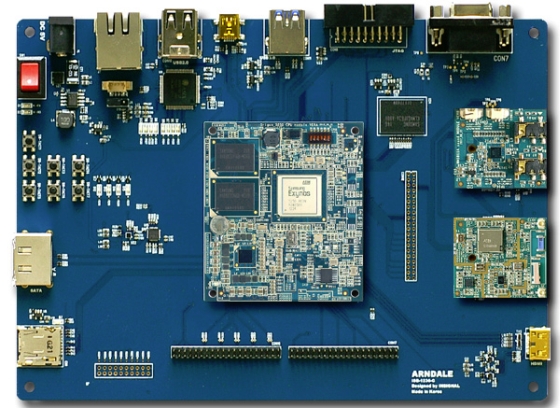 While the Chromebook includes a laptop shell with an 11.6 inch display, a QWERTY keyboard, and a battery, you’ll have to pay extra if you want to add those features to the Arndale board.

But this device is aimed at developers, not the general public. It features a range of connectors and sub-boards with WiFi, Bluetooth, GPS, and other components. The $249 package includes the CPU board, base board, sound board, and connectivity board.

The idea is that app developers can pick up an Arndale board and test their apps on the platform. Hardware developers can also see how peripherals or other devices work with Samsung’s new platform.

Theoretically there’s also nothing stopping you from picking up this $249 board and building your own Android-powered PC or trying to get Ubuntu or another Linux-based operating system up and running. Ubunt already works (to some degree) on the Exynos 5-powered Chromebook, after all.

This isn’t the first time Samsung has offered such a developer board. The company also offers boards with Exynos 3 and Exynos 4 chips.

Samsung also offers Android 4.1 software for the board, as well as bootloader code.

The Arndale board seems a lot like the PandaBoard developer board. But the latest PandaBoard is based on a TI OMAP 4 ARM Cortex-A9 chip. Future versions may include OMAP 5 ARM Cortex-A15 designs, but at this point the Samsung board is one of the first Cortex-A15 boards available to developers.