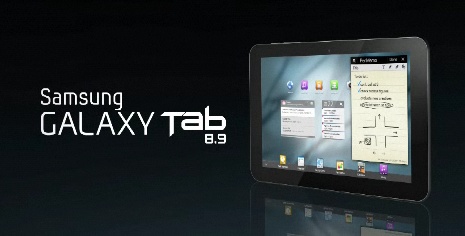 Samsung has unveiled the Galaxy Tab 8.9, a new Android tablet with an 8.9 inch display. As expected, the tablet will run Google Android 3.0 Honeycoomb, weigh just under a pound, and come in 16GB, 32GB, and 64GB versions. The Samsung Galaxy Tab 8.9 ill be the first Samsung tablet to feature Android 3.0 and a new version of Samsung’s TouchWiz customization.

The tablet is a hair thinner than the Apple iPad 2 and features a higher resolution 1280 x 800 pixel display and a dual core 1 GHz NVDIIA Tegra 2 processor.

The Samsung Galaxy Tab 8.9 will have a front-facing 2MP camera and a rear-facing 3MP camera with autofocus and an LED flash. The tablet will come in WiFi only and 3G versions.

Like other Samsung Android phones and tablets, the Galaxy Tab 8.9 will have hardware support for MPEG4, H.263, H.264, DiVX and Xvid video with support for 1080p HD video playback and 720p HD video recording.

The folks at Engadget and Android Community have posted some hands-on photos, comparing the tablet to the Motorola XOOM, Apple iPad, and other tablets.