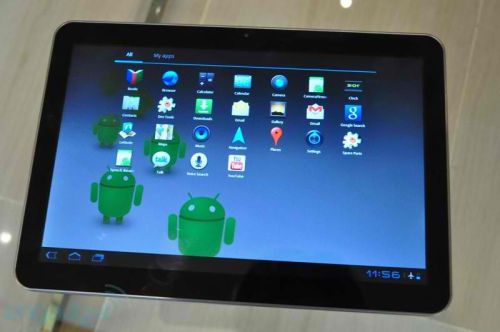 The Galaxy Tab 10.1 will have a 1280 x 800 pixel LCD display, an 8MP rear-facing camera with an LED flash and a front-facing 2MP camera for video calls. It can support 1080p HD video playback and recording, and features 802.11b/g/n WiFi and Bluetooth 2.1. There are no USB or HDMI ports.

The tablet will be available with HSPA+ and EDGE/GPRS mobile broadband connectivity and features a gyroscope, accelerometer, proximity sensor, and digital compass. It will come with 16GB or 32GB of storage and a 6860mAh battery. The Galaxy Tab 10.1 weighs just 1.3 pounds, making it a bit heavier than the 7 inch Galaxy Tab, but still lighter than than the 1.5 pound Apple iPad.

Engadget reports that the new tablet will launch in Asia and Europe in March. But there’s no information on pricing or a schedule for a US launch. The original Galaxy Tab also launched in Europe before coming to America.