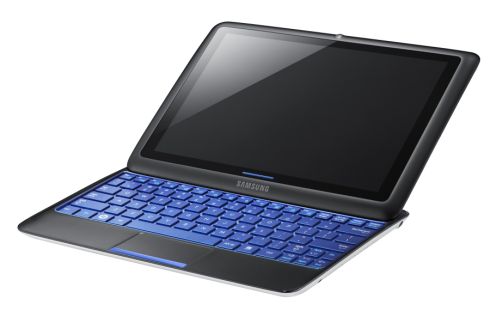 Samsung has unveiled a new “sliding tablet” computer which the company says “creates a new category of mobile PC,” even though the concept looks a lot like the Eee Pad Slider that Asus announced yesterday, and the HTC Shift which was available a few years ago. The difference is that the Shift ran Windows Mobile, the Eee Pad will run Android, and the Samsung Sliding Tablet will run Windows 7.

The Samsung tablet will features a 10.1 inch, 1366 x 768 pixel display, a 1.66GHz Intel Atom Oak Trail chip and run Windows 7 Home Premium with “Samsung Touch Launcher” software running on top. It will be available with 2GB of DDR2 memory and a 32GB or 64GB mSATA solid state disk.

The tablet will features HDMI output, a USB 2.0 port, 1.3MP camera, 802.11b/g/n WiFi, and optional 4G WiMAX, and 3G and Samsung says you should get up to 9 hours of battery life from the 6 cell Lithium Polymer battery.

The computer measures 10.5″ x 7″ x 0.8″ and weighs about 2.2 pounds. The slide-out keyboard features 80 or 81 keys (depending on the region, I imagine), and tucks away behind the computer when not in use. There’s an ambient light sensor to dim the screen and save battery life when you don’t need it to be super bright.

Samsung is also taking a play out of Apple’s book and emphasizing the benefits of the SSD on performance. The tablet reportedly boots in as little as 15 seconds, and resumes from hibernate or sleep mode in 3 seconds.

The Sliding tablet is due out in March for $699 and up.