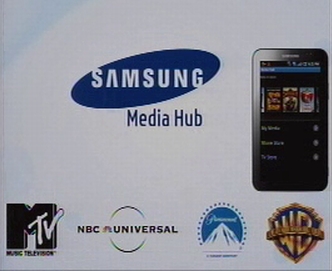 Samsung is taking on Apple big-time with its new offerings. Not only did the company announce that its Galaxy Tab 7 inch Android tablet would be available on all 4 major US carriers by the holidays (with a WiFi-only version coming soon for folks who don’t like contracts), but the company is also introducing a new media store called Samsung Media Hub. That means Samsung is aiming to offer consumers alternatives to the iPad and iTunes.

The Media Hub will let customers download movies and TV shows from a number of content partners including MTV, NBC Universal, Paramount and Warner, with next-day availability of some TV shows.

One of the key selling points is that you’ll be able to access Media Hub content on up to 5 devices. In other words, if you have a Samsung Galaxy S smartphone, a Samsung Galaxy Tab, and a few other supported Samsung devices (?), you can purchase a TV episode or movie once and download it on up to 5 different devices without paying again. If you have to deal with DRM, that’s the way to do it.

Samsung didn’t give specifics on how much you’ll have to pay for media, but did say that its prices would be “competitive” with similar services. In addition to purchases, the Samsung Media Hub will also support rentals.

As Apple alternatives go, Samsung appears to be building a pretty decent infrastructure — and its offerings aren’t limited to a single US wireless carrier. On the other hand, Apple has a bit of a head start building partnerships with media companies to offer music, movies, and TV shows through iTunes, and therefore has a much larger content library than Samsung will offer at launch.

Update: Samsung says it’s not prepared to make any announcements regarding Media Hub access for Samsung television sets yet.