Samsung is expanding its wearable product lineup with a new activity tracker called the Samsung Gear Fit. It’s a wristband with a curved display that helps you keep track of steps, heart rate, sleep, and other vital stats.

It’s Samsung’s answer to the FitBit, Nike Fuelband, or Jawbone Up. And it looks like a rather attractive option, at that. 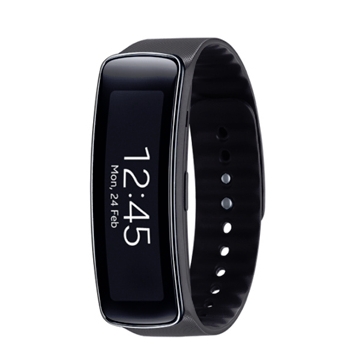 The Gear Fit has a 1.84 inch, 432 x 128 pixel curved Super AMOLED display, a 210mAh battery for 3-4 days of use, and features sensors including an accelerometer, gyroscrope, and heart rate sensor.

Like other fitness trackers, you can use it to keep track of steps, sleep, and other stats. But you can also use it as a stopwatch or timer — and the Gear Fit can pair with your phone over Bluetooth and display incoming notifications for phone calls, email messages, SMS, or other apps.

It can also work as a remote control for media playback, letting you skip tracks in your music player without pulling your phone out of your pocket, for instance.

In other words, Samsung’s activity tracker is also a smartwatch — sort of like the company’s new smartwatches are sort of activity trackers. Heck, even the new Samsung Galaxy S5 smartphone includes a heart rate monitor — Samsung’s bringing health to all of its new mobile products.

The difference is that the Gear Fit is a fitness device first and everything else second, rather than the other way around. There’s no camera or speaker, for instance.

It also has changeable wristbands in case you want to add a little color.

Samsung says the Gear Fit is compatible with 20 different Galaxy devices… which is a pretty good indication that, like the Gear smartwatch line of devices, you won’t be able to pair this activity tracker with non-Samsung phones or tablets.

The Gear Fit will be available in 150 countries on April 11th, along with the Galaxy S5 smartphone and Gear 2 and Gear 2 Neo smartwatches.