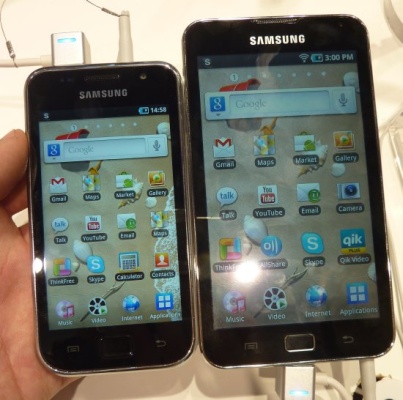 The Samsung Galaxy Player was one of the best looking Google Android powered portable media players I got a chance to see at CES last month. If you’re looking for a pocketable Android device which can do pretty much everything except make phone calls (and which doesn’t require a monthly phone contract), the little guy fits the bill thanks to its Android 2.2 operating system and full support for the Google Android Market.

The Samsung Galaxy S WiFi 5.0 has a 5 inch, 480 x 800 pixel display, a 1 GHz Samsung Hummingbird processor, and runs Google Android 2.2 with Samsung’s TouchWiz software running on top. It has a 5MP camera and a 2500mAh battery. And like its little cousin, the Galaxy S WiFi 5.0 includes access to the Android Market, which is a rarity for Android 2.x devices that can’t make phone calls.