Samsung unveiled its second-generation Galaxy Note smartphone today. It has a slightly larger screen, a faster processor, and a bigger battery — but the Galaxy Note II will actually be a hair thinner than the original Galaxy Note.

The Galaxy Note will ship in the US in mid-November. 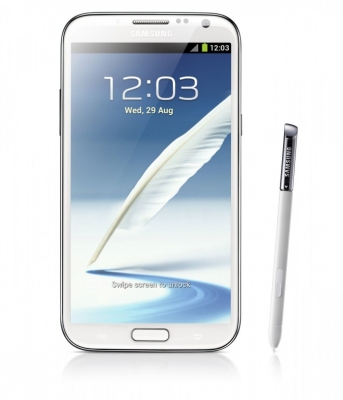 The Galaxy Note II continues to blur the lines between phones and tablets with a larger 5.5 inch display. It has a 1280 x 720 pixel display resolution, which is actually a little lower than the 1280 x 800 pixel screen found on the original, but I doubt most people will notice much difference.

By shaving a few pixels, Samsung has given the new model a 16:9 display which should handle HD video playback quite nicely.

Like all members of the Note family, the Galaxy Note II features an S-Pen, which is what Samsung likes to call its pressure-sensitive digital pens. Samsung also loads up the Galaxy Note II with pen-friendly apps including a new “Air View” features that lets you preview pictures, email messages, or other content by hovering the pen over the screen.

The tablet measures 9.4mm, which is a fraction of a milometer thinner than its predecessor, even though the new model has a 3100mAh battery instead of a 2500mAh battery.

The new smartphone has a 1.6 GHz quad-core Exynos processor, 2GB of RAM, a front-facing 1.9MP camera, and a rear-facing 8MP camera. It will be available with 16GB to 64GB of storage.

Samsung will ship the device with Android 4.1 when it launches in Europe in October. For cellular data, the device will be able to handle HSPA+ or 4G LTE networks.