Samsung has unveiled its first smartwatch, the Samsung Galaxy Gear. As expected, it’s a wristwatch that’s powered by Google Android, and which is designed to pair with a smartphone so you can make calls, view notifications, and respond without taking your phone out of your pocket. 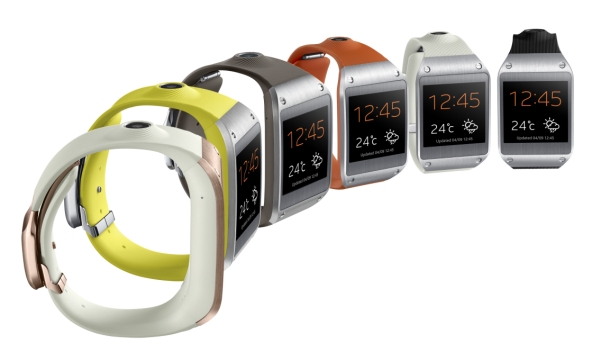 The smartwatch weighs 2.6 ounces and it will be available in 6 colors: black, gray, orange, beige, gold, and green.

The Galaxy Gear has a 1.9MP camera which can shoot short 720p videos. It’s built into the wrist strap so you can point your wrist and tap a button to snap a photo.

At launch, the Galaxy Gear will support apps including RunKeeper, MyFitnessPal, Pocket, and Evernote, among others. It also supports Samsung’s S Voice app, letting you ask your watch for the weather forecast or tell it to make a phone call without removing your phone from your pocket. The mic and speaker are positioned so you can talk whether your watch is held up to your head or out in front of you.

The Galaxy Gear connects to your phone or tablet over Bluetooth. You won’t be able to make calls or use the internet on your phone unless it’s connected to your phone.

The Samsung Galaxy Gear is set to launch globally starting September 25th, at the same time as the Galaxy Note 3. It’ll be available in the US starting in October for $299.