We already had a pretty good idea that Samsung’s next foldable smartphone would be a modern take on the classic flip phone. Now a short hands-on video leaked by Ben Geskin gives us a better look at the the folding mechanism of the upcoming Samsung Galaxy Z Flip. 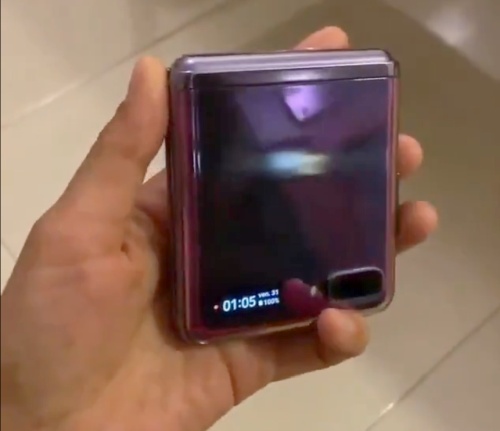 As expected, when the screen is open, the device looks a lot like other recent smartphones, thanks to a 6.7 inch AMOLED display with a 22:9 aspect ratio.

But there’s a hinge in the middle that lets you fold the phone in half to make it more pocketable. You can hear the phone snap into place when it’s folded. And in order to unfold, you just slide a finger between the two sections and lift.

Also confirmed is the small secondary display next to the camera. This 1.06 inch screen isn’t big enough to use as a camera viewfinder like the 2.7 inch display on the Motorola Razr foldable smartphone. But it will let you see notifications at a glance without unfolding the phone, which could be a handy way to get information you need quickly without getting drawn into the siren song of social media or other distractions.

The phone appears to have dual rear cameras, as expected, and a single front-facing camera in a punch hole in the top center section of the display.

Unconfirmed, but rumored features include a thin glass cover for the display rather than the plastic found on most other foldables so far, a Qualcomm Snapdragon 855+ processor, 8GB of RAM, 256GB of storage, and a 3,300 mAh battery.

Unlike the Samsung Galaxy Fold, the upcoming Galaxy Z Flip isn’t a tablet that becomes a phone-sized device when folded. It’s a phone that becomes smaller when folded. There’s something satisfying about the idea of a mobile device that’s not trying to do too much — but the with an expected price tag of $1600 or more, the phone still seems like an expensive tech demonstration rather than a product with widespread consumer appeal.

Maybe Samsung will surprise us with a lower-than-expected price or special features that haven’t already been leaked. we should know more soon — the company us holding an event on February 11th, where Samsung is expected to announce the Galaxy Z Flip as well as other upcoming flagship phones.