Samsung held a press event to officially introduce its latest smartwatch today, but the company also used the opportunity to tease something new: an upcoming device called the Samsung Galaxy View.

So what’s the Galaxy View? An Android tablet with a BIG screen. 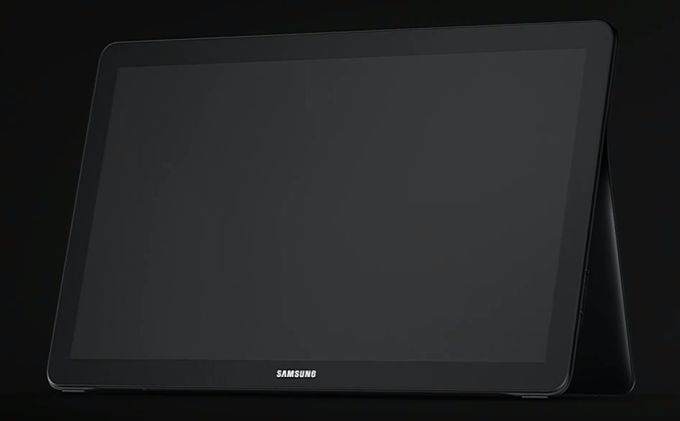 The company didn’t provide many details about the device, but a teaser video showed a tablet with a built-in adjustable stand that lets you prop it up like a desktop monitor or fold the stand flat to place tablet on a table, desk, or laptop.

How big? Well, there’s been evidence that Samsung is working on an Android tablet with an 18.4 inch display code-named “Tahoe.” I’d say there’s a pretty good chance that Tahoe is the Samsung Galaxy View.

The screen resolution might seem a bit low at a time when smartphones with 4K displays are starting to arrive. But it makes sense for a tablet that’s designed for media consumption: place an 18.4 inch tablet on a table a few feet away, and full HD videos should look pretty great.

The battery may also seem a bit small for a device with a large display… but you probably don’t need all-day battery life from an enormous tablet, since it’s likely you’ll use it around the house rather than at a coffee shop. Just plug it in when you’re watching videos and unplug it to move from room to room or get in a few hours of web surfing or gaming from the couch.

Or maybe the rumored specs are wrong. We should know more in October. That’s when Samsung says it’ll provide more details about the Galaxy View.

Samsung seems to making a habit of teasing upcoming product launches in this fashion: the company released a brief teaser for the Galaxy S2 smartwatch during the kick-off event for its Galaxy Note 5 and Galaxy S6 Edge Plus smartphones. I wonder what product teaser we’ll see when the Galaxy View launches in October.