The Samsung Galaxy View is a huge Android tablet with an 18.4 inch full HD display, an octa-core Samsung Exynos 7580 processor, and a built-in handle and kickstand that lets you carry it around the house and then prop it up for watching videos, playing games, or doing whatever else it is you might do with a portable 18.4 inch screen.

Samsung hasn’t officially unveiled the Galaxy View yet, but the company teased it last month and details have been leaking ever since. Now Adorama is taking pre-orders (at least until someone at Samsung notices), so one more big question has been answered: the Samsung Galaxy View is priced at $599. 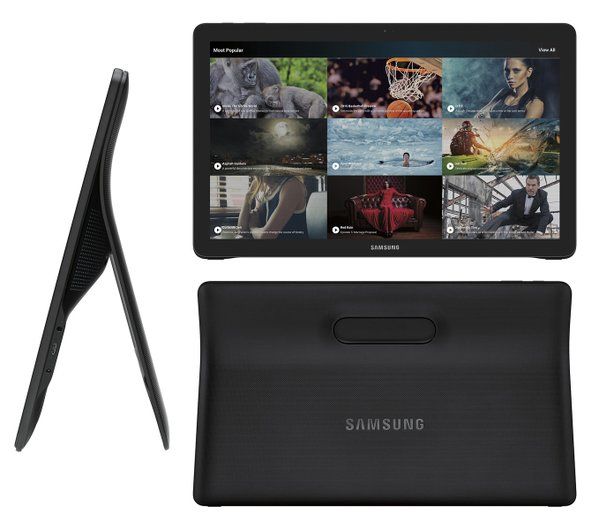 Update: @evleaks has shared the image shown above.

The Galaxy View isn’t the first device to blur the lines between Android tablet and desktop monitor. But it does have at least one feature that could be pretty special: according to Adorama the Galaxy View gets up to 8.5 hours of battery life.

That could make it easy to not only carry the device from room to room, but also to use it for extended periods without plugging it in. You could even take it outside for use on camping trips, tailgate parties, or what have you. At least that seems to be what Samsung’s thinking, based on some promotional images we’ve seen.

The Galaxy View also supports 4G LTE, which could come in handy if you do plan to use it outside the house.

The tablet has 2GB of RAM, 32GB of storage, a microSD card slot with support for up to 128GB of removable storage, 802.11ac WiFi, Bluetooth 4.1, and Android Lollipop software.