Samsung’s next 2-in-1 Windows tablet may be coming soon.

Last year the company launched a 12 inch tablet with a detachable keyboard called the Samsung Galaxy TabPro S. It featured a high-resolution AMOLED display, 4GB of RAM, up to 256GB of solid state storage, and an Intel Core M Skylake processor.

There have been rumors for months suggesting that a second-gen model called the Galaxy TabPro S2 was on the way. Now it looks like the rumors were true. 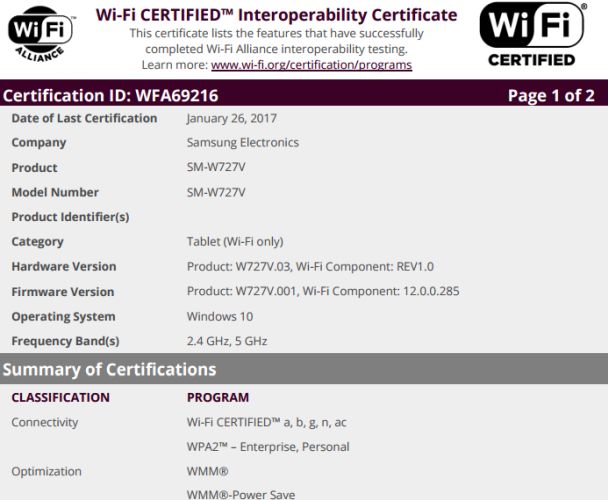 SamMobile reported in August that at least one version of the TabPro S2 would have the mdoel number SM-W727. Now a device matching that model number has showed up at the WiFi Alliance certification page, along with several other new Samsung devices (with model numbers including SM-T825, SM-T810, and SM-T817).

There aren’t many details in the product listing, but we don know that the tablet runs Windows 10 software and supports 802.11ac WiFi.

SamMobile also seems to think the new tablet will have the same 2160 x 1440 pixel Super AMOLED display as its predecessor, but it’s likely that the new version will have an Intel Kaby Lake processor instead of an older, less powerful Skylake chip.

There’s no word on when the TabPro S2 will be officially unveiled. But since Samsung didn’t show off the new tablet at the Consumer Electronics Show in early January, the upcoming Mobile World Congress event at the end of February could be a possibility.