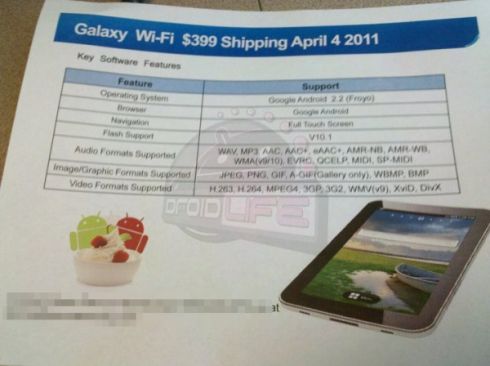 Samsung is expected to launch an Android tablet with a 10.1 inch display and a dual core NVIDIA Tegra processor soon. But that doesn’t mean the company is done pushing the 7 inch Samsung Galaxy Tab which was first introduced last fall. A tipster at Droid Life picked up a flyer from a Samsung rep which says a WiFi version of the tablet is coming April 4th, for $399.

Currently the only way to get a Samsung Galaxy Tab 7 inch tablet is to buy a 3G capable model for full price (about $500 to $650) or to sign up for a mobile broadband contract to get a discounted up-front price of $199 to $299. A sub-$400, contract-free WiFi-only option sounds like a nice alternative.

The only problem is that the Galaxy Tab already looks like last year’s technology. It has a single core 1 GHz Samsung Hummingbird processor and runs Google Android 2.2 at a time when Samsung and other companies are coming out with dual core tablets running Android 3.0 Honeycomb.

On the other hand, most of those newer tablets are significantly more expensive, with price tags as high as $800, while the WiFi-only Galaxy Tab looks like it will be priced a hundred bucks cheaper than an entry level iPad 2… or at about the same price as a first generation iPad.

4 replies on “Samsung Galaxy Tab WiFi coming next month for $399?”