The Samsung Galaxy Tab S6 which launched last summer is probably the most powerful Android tablet on the market today — but with a starting price of $650, it’s also one of the most expensive.

It’s a similar-sized tablet and like the Galaxy Tab S6, the Lite model supports Samsung’s pressure-sensitive S-Pen. But the Galaxy Tab S6 Lite has slightly less impressive specs across the board to keep the price down. First announced by Samsung Indonesia, I suspect the new mid-range tablet should be available in additional markets soon. 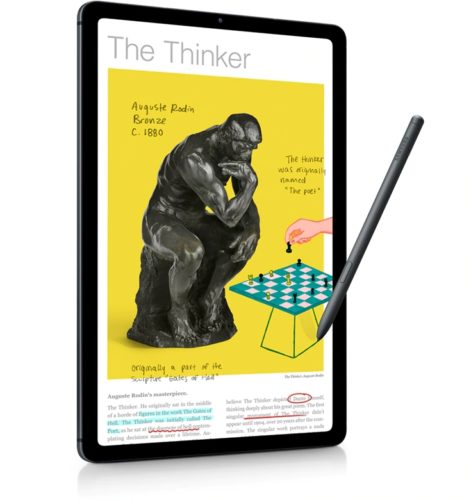 The Samsung Galaxy Tab S6 Lite isn’t exactly a cheap device. It has an octa-core processor, optional support for 4G LTE,and Samsung promises up to 13 hours of battery life while streaming videos.

But in a head-to-head spec comparison with the original Galaxy Tab S6, it’s pretty clear which is the premium model and which… is not.

In other words, the Galaxy Tab S6 may be a little older, but it’s faster, has a better display, features a slightly thinner and lighter design, and faster USB, among other things.

Samsung also says it gets longer battery life (up to 15 hours of video playback time).

But that $650 and up price tag surely limits the appeal.