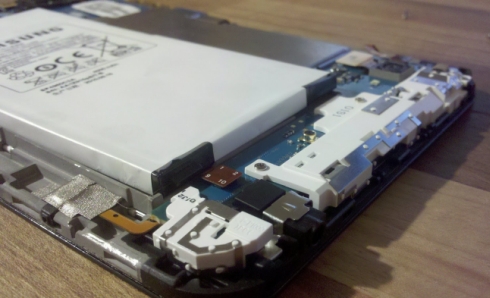 The Samsung Galaxy Tab is a 7 inch Android tablet that will ship soon from all four major US wireless carriers as well as a wireless providers around the globe soon. Early reviews say it’s the first real competitor to the Apple iPad in terms of build quality and design — although many Android apps clearly aren’t designed for use on larger displays yet.

But most of those early reviews have focused on the consumer experience. Hardware hacker jkkmobile is taking another approach. He’s dissected his Galaxy Tab to see what it looks like under the hood. In a nutshell, the battery takes up most of the space, but it’s also worth noting that there are two decently sized speaker boxes under the hood.

Jkkmobile also advises against taking the tablet apart yourself unless you really have a good reason to do so, since it’s pretty difficult to ply off the plastic cover on the back before you can get to the screws. That said, it looks like there’s a little extra space inside the case which means that it might be possible to make some modifications — although to be honest, the Galaxy Tab already has some of the best Android tablet specs around, which makes it hard to think of ways to improve the hardware experience.